My handlers at Hodder have sent me a terrific Carte Blanche mission kit today -- including a nicely embossed 007 folder containing the press release, a slick official website card, and a Technika MP4 player with the Carte Blanche title and cover reveal animation. Very nice! And it did not self-destruct in 5 seconds.

Carte Blanche by Jeffery Deaver will be released on May 26, 2011, and can be pre-order now at Amazon.co.uk.
Posted by John Cox at 1:29 PM No comments:

A spy in Dubai

The article states that Sheikh Mohammed bin Rashid al-Maktoum "has already given the go-ahead for the film version of the book (working title: From Dubai With Love) to be shot in Dubai, and even offered his private Boeing 747 to fly in equipment and stars, including Daniel Craig." Okay...

While the article doesn't really revealing anything we don't already know about the use of Dubai in Carte Blanche (which is almost nothing), it is an interesting look at the political and financial issues Dubai has faced in recent years.

Click to read: Shaken, not stirred: How Dubai got back in business at the London Evening Standard.
Posted by John Cox at 1:41 PM No comments:

Get a signed UK First Edition edition of Carte Blanche 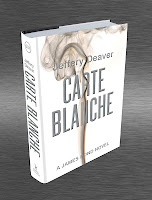 Goldsbro Books in the UK is offering signed First Editions of Jeffery Deaver's new James Bond novel, Carte Blanche, for £18.99. Release date is May 26, 2011, but you can pre-order your copy now. Know however that they do charge your credit card at the time of purchase.

Goldsbro is terrific UK retailer who offer special editions not found anywhere else. For instance, Goldsbro is selling exclusive signed hardcover editions of Andrew Lane's enjoyable Young Sherlock Holmes series. These books are only available as paperbacks elsewhere. (I was ordering the just listed Book 3, Black Ice, when I stumbled on this signed Carte Blanche.)

Signed first editions of Devil May Care by Sebastian Faulks were few indeed. But something tells me Mr. Deaver is going to be less stingy with his signature. Still, it's nice to have a copy locked down well in advance.
Posted by John Cox at 2:13 PM No comments:

Very good article by Philippa Kennedy in The National. Click headline to read.

Kevin Collette over at OUR MAN FROM BOND STREET has a terrific exclusive report on Jeffery Deaver's onstage appearance at the Emirate Airlines Festival of Literature from his own on-the-scene correspondent, Nathalie Cloet. Click the links below to Bond with Deaver in Dubai.


Part 1: State of Excitement
Part 2: "With villains, anything goes."
Part 3: A Deaver novel set in the world of Fleming

Thanks Kevin and Nathalie!
Posted by John Cox at 7:27 AM 8 comments:

Thanks for our friends at Simon & Schuster, today we are able to reveal cover art for the U.S. hardcover edition of Carte Blanche

by Jeffery Deaver. This is the final cover. 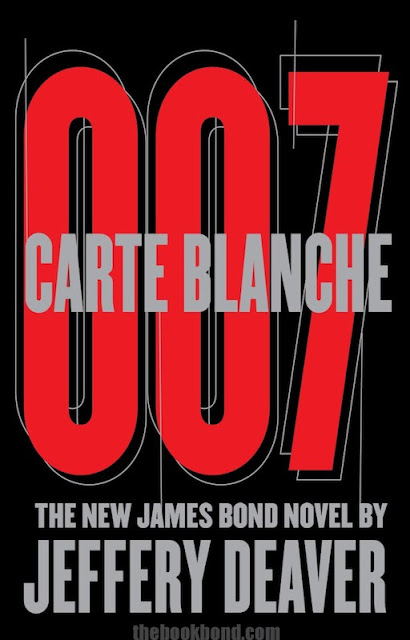 With thanks to Kelly Welsh at Simon & Schuster.
Posted by John Cox at 7:55 AM 9 comments:

Amazon.co.uk has updated their listing for the new Jeffery Deaver James Bond novel with the just announced title, Carte Blanche, and cover art. They've yet to update the release date from May 28 to May 26, 2011.

Farewell "Project X." It was fun while it lasted.

It looks like Dubai has suddenly become THE place to get your Bond on.

Fresh off Jeffery Deaver’s Dubai-based unveiling of his new James Bond novel, Carte Blanche, comes news that Young Bond author Charlie Higson will be appearing in March to talk about “The Making of Young Bond.”

Charlie will appear first on Friday, March 10, at the InterContinental Hotel to discuss his new zombie series, The Enemy

. He then returns on March 11 to give an hour long talk on “The Making of Young Bond.”

The programs are part of the Emirates Airline Festival of Literature 2011. CLICK HERE for more details on the festival and Charlie appearances.
Posted by John Cox at 6:32 PM No comments:

So those photos of Jeffery Deaver standing beside a stack of his new James Bond novel, Carte Blanche, might lead one to think the book is printed and ready for the bookstores. Nope. According to the official Carte Blanche Twitter feed, those are just decoys made special for this Dubai mission. Inside the pages are blank - "confidential material removed until 26 May 2011."

Still, a cool collectible. What I wouldn't give for one of these! 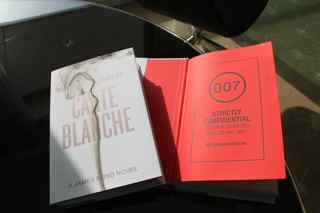 Link: THE MAN WITH THE GOLDEN PEN

In an exclusive interview novelist Jeffery Deaver, who has written the new James Bond book, reveals his fiendish plans for 007. Click headline to read.

James Bond roaring back in a Bentley

Along with the reveal yesterday of the title and cover art for the new 007 novel, Carte Blanche, came news that Jeffrey Deaver's rebooted James Bond for the 21st Century will be driving a Bentley Continental GT.

This is in keeping with the tradition of the literary James Bond. Bond drove three different Bentley's in the course of the 14 original Ian Fleming novels. The Bentley also appeared in the first James Bond continuation novel, Colonel Sun (1968). Bond upgrade to a Bentley Muslane Turbo in the fourth John Gardner book, Role of Honor (1984), which also appeared in Raymond Benson's second book, The Facts of Death (1998). Recently the original Bentley returned in the Young Bond novels by Charlie Higson, as well as Sebastian Faulks 2008 Bond adventure, Devil May Care.

It's a terrific choice, in my opinion. One that updates Bond while still keeping continuity with Ian Fleming.

JAMES BOND IS BACK IN...


The new James Bond book, due to be published later this year and written by best-selling thriller writer Jeffery Deaver, is to be called Carte Blanche. Its title and cover artwork are unveiled today (Monday 17th January), at a special launch event at the InterContinental Hotel in Dubai.

Like Fleming, Jeffery Deaver takes inspiration from exotic locations around the world, and after visiting Dubai for the Emirates Airline Festival of Literature last year he decided to set part of Carte Blanche in the United Arab Emirates City.

Carte Blanche is due to be published by Hodder and Stoughton in the UK, a few days before Fleming’s birthday, on 26th May 2011. It has been commissioned by Ian Fleming Publications Ltd.

Jeffery Deaver comments, “I’m really excited about being back in Dubai. It is an inspirational and awe-inspiring city and makes a perfect Bond location—especially for a novel that pushes our hero to new extremes.”

Regarding the book's title, Deaver added, “In the world of espionage, giving an agent carte blanche on a mission comes with an enormous amount of trust and constantly tests both personal and professional judgement. Part of the nonstop suspense in the novel is the looming question of what is acceptable in matters of national and international security. Are there lines that even James Bond should not cross?”

Unlike the most recent James Bond book, Sebastian Faulks’ period piece Devil May Care, Jeffery Deaver’s Bond will have a contemporary setting. As part of his latest assignment, the modern-day secret agent travels with Emirates Airline and spends a number of thrilling hours in Dubai both meeting up with an old friend and tracking a very disturbing villain.

The novel’s setting encompasses Deira and Port Saeed, and the history of the Emirates provides an exciting backdrop for some heart-stopping action.

Bond is renowned for visiting the most exotic and glamorous of cities and this is the first time Dubai has featured in a James Bond novel.

Jeffery Deaver will be making a special appearance at Emirates Airline Festival of Literature, on Tuesday 18th January, when he will be speaking about his love of Bond and his experience of writing Carte Blanche.

Jeffery Deaver has written 28 novels and sold more than 20 million books worldwide. He is best known for his Kathryn Dance and Lincoln Rhyme books, most notably The Bone Collector, which was adapted for film in 1999, starring Denzel Washington and Angelina Jolie. Before becoming a full-time author, Deaver was a journalist, like Fleming, and attorney. He started writing suspense novels on the long commute to and from his office on Wall Street. His books are now translated into 25 languages and he lives in North Carolina.
Posted by John Cox at 11:38 PM No comments:

Excited to reveal that the name of the new Bond novel will be . . . CARTE BLANCHE 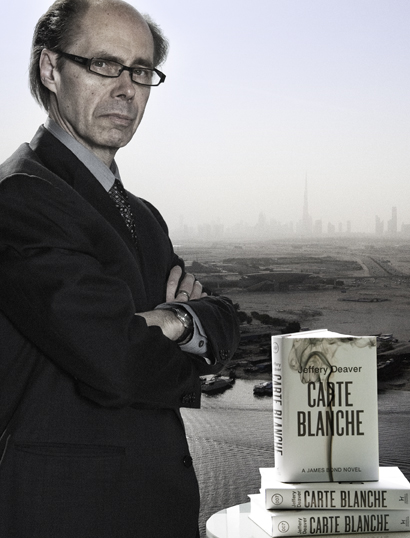 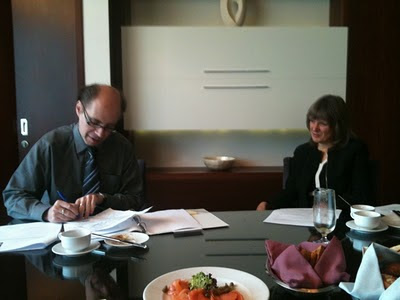 PROJECT X TITLE AND COVER ART TO BE REVEALED IN DUBAI!

will be revealed this week at his event in Dubai. 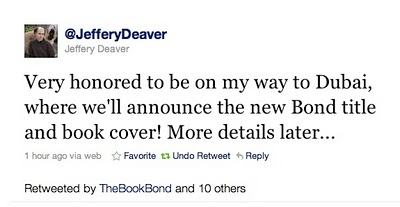 Click here for details on the Dubai event. Thanks to [dark] at the CommanderBond.net forums for the tip-off.
Posted by John Cox at 3:47 PM No comments:

Ian Fleming International Airport, a new international airport for private jets and small commercial aircraft, has been unveiled in northern Jamaica. The airport was formerly called the Boscobel Aerodrome. The facility is just outside the coastal town of Orcabessa and is the Caribbean island's third international airport.

Lucy Fleming, Ian Fleming's niece, attended the ribbon-cutting ceremony. She said her uncle would have been thrilled to see an airport emblazoned with his name in the Jamaican parish of St Mary.

"He adored Jamaica and found so much inspiration and relaxation here. So I tell you something, to have this accolade of having an airport named after him here I know would have been a great honour for him," Ms Fleming said. "Honestly, I don't think he would have written those (Bond) books without Jamaica."

Associated Press
Posted by John Cox at 7:34 AM No comments:

But this doesn't mean 2011 will be completely Young Bond free. I still have my friends at Puffin and I'm hoping to have some Young Bond coolness to share with you soon.
Posted by John Cox at 9:05 AM No comments:

Bond 23 is official! Click on headline for details.
Posted by John Cox at 12:14 PM No comments:

Rosamund Pike narrates new The Spy Who Loved Me audiobook 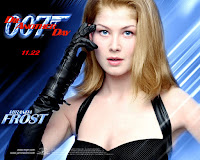 , tells WENN that she recently did a new audiobook reading for Ian Fleming's The Spy Who Loved Me

"I do a lot of audio books just for fun because I like using voice to create character. Most recently I've done one of the James Bond novels, The Spy Who Loved Me

, which is coming out. It's the only one that was narrated by a woman. They're releasing the whole audio set of all 20 original Fleming/Bond novels next year."

Wait, did she say 20 books? Of course, Fleming only did 14 James Bond novels, so what are the additional six titles? The Young Bond books maybe? Or might we see select audiobook recordings of other adult continuation novels?

By the way, various media outlets are saying Pike is "the first woman to ever voice a 007 audiobook." Not so. Samantha Bond, who portrayed Miss Moneypenny in the Pierce Brosnan Bond films, narrated several of the Bond novels, as has former Bond Girl Joanna Lumley (

On Her Majesty's Secret Service).

Email ThisBlogThis!Share to TwitterShare to FacebookShare to Pinterest
Tags: Audiobooks, Ian Fleming, The Spy Who Loved Me

Jeffrey Deaver's upcoming James Bond novel has made the Guardian's list of The best books of 2011. Damn straight!

U.S. will get Project X two weeks after UK

That means U.S. fans will have to wait an addition two weeks for the book, which is released in the UK on May 28 (Ian Fleming's birthday). The last James Bond continuation novel, Devil May Care

by Sebastian Faulks, was released in the U.S. and UK on the same day.

As we reported last month, Jeffery Deaver will reveal some of the first details of his new reboot Bond book at a special event in Dubai on January 18th. Fans on the CBn forums are debating whether this means one of the "several exotic locations" featured in the book will indeed be Dubai. Hey, I like the idea!
Posted by John Cox at 9:16 AM No comments: