DOUBLE OR NOTHING cover reveal

Ian Fleming Publications has revealed the final cover art for Kim Sherwood's Double or Nothing. Watch the reveal below.

Looks like the book will also get a Waterstones special edition release (below). Author Kim Sherwood has teased on her Twitter that news of a U.S. release may be coming soon.
Double or Nothing will be released in the UK on September 1, 2022 and is available for pre-order on Amazon.co.uk.
Posted by John Cox at 7:14 AM 2 comments:

As we all enjoy the latest James Bond continuation novel, With A Mind To Kill by Anthony Horowitz, I thought I share this look back at the very first time James Bond was continued in Colonel Sun by Kingsley Amis. I love seeing old ads for "The New James Bond". 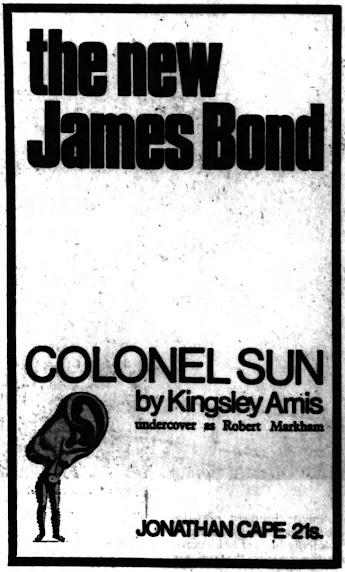 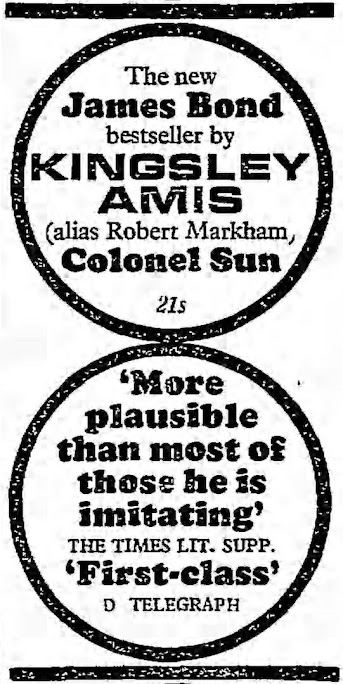 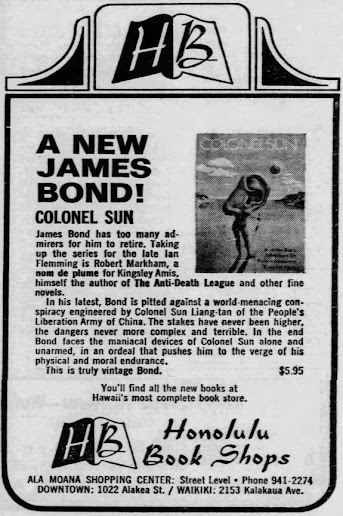 Colonel Sun was released in March 1968 to surprisingly negative, even hostile reviews. This may be why the "Robert Markham" series wasn't continued and why Amis didn't write another Bond (in interviews at the time he said he might). But the book has lived on and is now generally regarded as one of the best by fans. It was most recently reprinted in hardcover in 2018.
Posted by John Cox at 9:58 AM No comments: 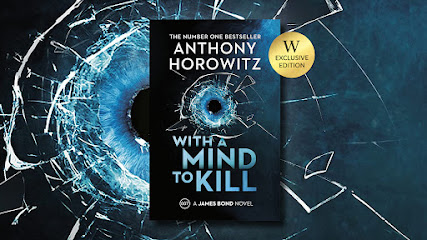 Having received my stenciled edge Waterstones Exclusive Edition of With A Mind To Kill, I'm happy to report that it also contains additional material as did Waterstones previous special editions of the Horowitz books. For some reason, this was not advertised on the Waterstones website, but it is unique to this edition.

The chapter is called "Bond Goes To Jail" and has very short extract from an unused television script by Ian Fleming in which 007 goes undercover at San Quentin prison in California. Author Anthony Horowitz then explains how he originally set out to use the idea of Bond in jail in With A Mind To Kill, just as he used unpublished Fleming material in his previous two Bonds. But, ultimately, he decided it wouldn't work.

You can purchase the Waterstones Exclusive Edition signed or unsigned.

As I previously reported, Goldsboro Books is also offering their own signed and numbered limited editions with sprayed black edges. No extras in that, but this Goldsboro edition may eventually turn out to be the more rare. Also, my friend Tanner at the excellent Double O Section tells me his Goldsboro edition doesn't have a price on the dust jacket, so that is a variant jacket. 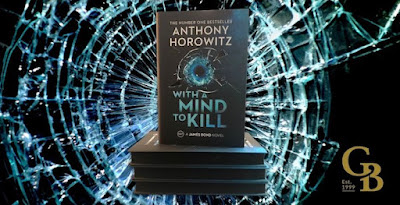 Or you can just purchase the regular UK edition at Amazon.co.uk and the U.S. edition from Harper Collins at Amazon.com. But I bet there's some of you out there who will get them all!

You can read my review of With A Mind To Kill HERE.

Email ThisBlogThis!Share to TwitterShare to FacebookShare to Pinterest
Tags: Anthony Horowitz, Ian Fleming, Special Editions, With A Mind To Kill

It was 30 years ago that John Gardner's 11th original James Bond novel Death Is Forever arrived in the U.S. bookstores. This was one of handful of titles that was released first in the United States. While not one of my favorite Gardner books, it was a thrill to have a new Bond every year and all the Gardner books remain special to me.

Here's a review of the book from 30 years ago today. Is 007 forever? I think we know the answer to that!

My own copy of Death Is Forever, purchased in 1992, has a sticker on the cover pitching it as a "Super Value!" I normally strip off any stickers to have a clean cover. However, when a sticker says something Bond specific, as this one does ("Bond is Back"), it stays. And this wasn't added later in a clearance sale. I bought all the Gardner books the instant they hit the bookstores and this sticker was there on day one. Would love to know the story behind it and how many books may have it. 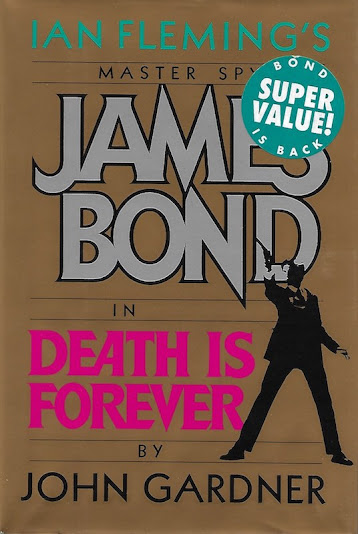 You can buy the recent reprint editions of Death Is Forever at Amazon.com and Amazon.co.uk.
Posted by John Cox at 7:34 AM 5 comments:

After dropping "007" from the title of their last three series, Dynamite is bringing it back with a series in August called, yes, OO7. It will be written by Phillip Kennedy Johnson with art by Marco Finnegan. Below is the cover of issue #1 and a plot description. 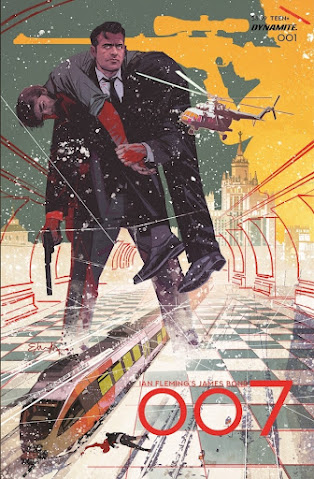 The most famous spy in fiction returns to heat up the summer comics season with a thrilling tale of double agents, assassins, old flames, and heaps of intrigue. James Bond finds himself outplayed with a metaphorical bad hand on a Russian excursion, forced to eliminate an asset he was meant to extract. A shootout with his enemy counterparts leaves Bond with more questions than answers… questions about their American accents, their bleeding-edge technology, and most importantly, how they seem to know so much about him.
Abandoned by his superiors, facing suspension at MI6, and questioning his waning sense of duty, 007 gets an urgent message from former 00 agent Gwendolyn Gann, a mentor and old flame from his earliest days. Gann’s gotten back in the spy game, and needs Bond’s help… but will Bond make it on time? And what are her ties to the mysteruous new player known only as Myrmidon?

I always wondered if Dynamite dropping "007" from their James Bond series title was an attempt to synchronize with No Time To Die and the idea that Lashana Lynch's Nomi was now 007. I'm glad to see it come back.

You can see some alternate covers for issue #1 at Dynamite Entertainment.