To celebrate Ian Fleming’s birthday we’re giving you the chance to win two fantastic prizes. Click on the link in our bio and enter by midnight tonight (BST) to be in with a chance of winning. Good luck! #jamesbond #ianfleming #ianflemingsjamesbond #007 #jamesbond007 #competition #astonmartin #secretcinema #birthday @vintagebooks
A post shared by Ian Fleming, Author (@ianflemings007) on May 28, 2019 at 3:08am PDT

KINGSLEY AMIS on James Bond in 1989

Here's a short BBC interview from 1989 in which the first James Bond continuation author, Kingsley Amis, talks about the the new Bond film, Licence To Kill. 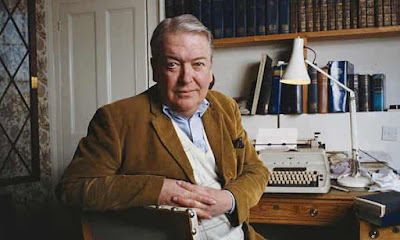 Every collector knows that some books marketed as a "limited edition" can turn out to be anything but. Or, even if limited (i.e., expensive), they never really become desirable enough to increase in value, and often decrease. This has happened with some of the recent James Bond continuation novels, which have seen multiple "special" and "limited edition" releases. But many can still be found at their original price or lower. 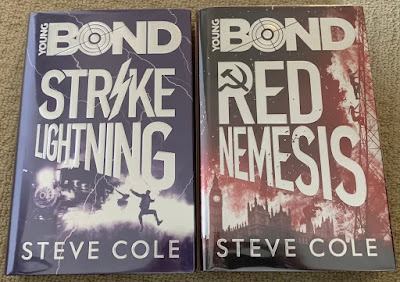 The exception appears to be the last two Steve Cole Young Bond novels, Strike Lightning and Red Nemesis, both of which were released as a "limited edition" hardcovers at the same time as the paperback editions. These hardcovers have proved to be very elusive and are now listing online for quite a bit of money. That is if they show up at all. At the moment, I can't locate a single copy of Red Nemesis. Chances are this final book may have had an especially small print run.

Publishers sometimes print only what is pre-ordered. This is what happened with the John Gardner novels. Gardner's later books are harder to find than his earlier works, with his last book, COLD, especially difficult to find in hardcover. But it now looks like Red Nemesis might be even harder to find than COLD, and this only a few year after publication.

So if you bought these at the time...feel good about it!

Thanks to Tanner at Double O Section for the alert.
Posted by John Cox at 7:20 AM 2 comments: