'From Russia With Love' Decades Edition

CommanderBond.net has revealed cover art for a new edition of From Russia With Love. Part of the Penguin Decades series, the book is due for release in the UK on April 1st.
"Penguin Decades bring you the novels that helped shape modern Britain. When they were published, some were bestsellers, some were considered scandalous, and others were simply misunderstood. All represent their time and helped define their generation, while today each is considered a landmark work of storytelling."

Decent cover, but certainly that Walther P99 is an odd choice. Bond used a Beretta in From Russia With Love. If they wanted to use a Walther, certainly the PPK is the iconic Bond gun of choice. The P99 came into being in 1997 in the Pierce Brosnan Bond film Tomorrow Never Dies. Fans never warmed to it, and Eon wisely brought back the PPK in Quantum of Solace.
Posted by The Book Bond at 7:33 AM No comments: Flipping through some old German fanzines, I came across this interesting artwork for John Gardner's third James Bond novel, Icebreaker.

The artwork is similar to the UK hardcover in that it is Choppingesque, but is very different in design. The UK cover shows the skeleton hand pinned beneath a wooden plank clutching a broken ski pole. This art shows the hand clutching dandelions against an Iron Cross background.
Could this have been a rejected cover design that was then used for adverts?
Don't know much about this, and this is the best image I have. Does anyone have a better one?
Posted by The Book Bond at 11:21 AM No comments:

Blast from the past...

So how did us old-timers get a first look at the cover of the new Bond novel before the internet? From the post office, of course!
The good old American James Bond fan club would send out these postcards to club members. Not only would this be our first look at the cover art, but frequently this is how we'd learn the title as well. Only thing it didn't reveal was the color of the book jacket. I recall being quite surprised that this Icebreaker cover turned out to be red. 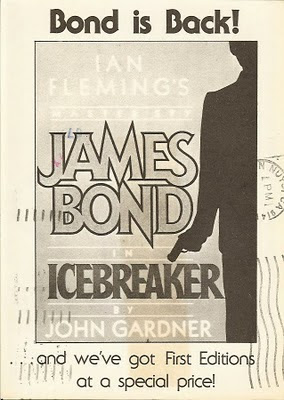 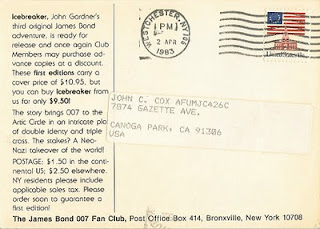 Imagine James Bond in the Public Domain (meaning under no copyright restrictions). It’s actually not too hard. Sherlock Holmes has been in the Public Domain since 1988, and what we have seen is an explosion in unlicensed novels that find Holmes battling Dracula, traveling through time, and even confronting the War of the Worlds martians. Could the same thing happen to James Bond?

Well, it would have happened on New Years Day had U.S. copyright laws not been amended in 1976.

An interesting article in Clarksville Online points out that current U.S. law extends copyright protections for 70 years from the date of the author’s death. But prior to the 1976 Copyright Act (which became effective in 1978), the maximum copyright term was 56 years (an initial term of 28 years, renewable for another 28 years). Under those laws, works published in 1953 would be passing into the public domain on January 1, 2010.

So if we were still under the copyright laws that were in effect at the time of Casino’s publication, the world’s most famous secret agent would have entered the public domain on January 1, 2010, even assuming that Fleming had renewed the copyright.

However, under current copyright law of 1978, we won’t see James Bond enter the Public Domain for another 39 years. This is because the copyright term for works published between 1950 and 1963 was extended to 95 years from the date of publication, so long as the works were published with a copyright notice and the term renewed (which is generally the case with famous works such as this).