Well, the last series I featured here, the Jove paperbacks, received a drubbing in the comments, with several of my UK friends complaining (justifiably) that they were far too "American" in their look and design. So to redeem the USA, here is another U.S. series -- which I'd say is just as "American" in look and vibe -- but one that I find pretty darn terrific! In fact, as far as cover paintings go, this might actually be one of the very best paperback series of them all, and it's a shame Bantam only did a handful of the books in this style.

Bantam first entered the Bond game in May 1969 when it published the paperback edition of Colonel Sun by Kingsley Amis. The book featured original cover art by the great Frank C. McCarthy, who in conjunction with Robert McGinnis painted the classic Bond movie posters for Thunderball, You Only Live Twice, and On Her Majesty's Secret Service.

Then, starting in May 1971, Bantam released more Bond titles with McCarthy artwork, including Casino Royale, From Russia With Love, and Doctor No. The new series featured a bold JAMES BOND down the side and a tag-line touting the books a "All-Time" Bestsellers. Bantam would also reissue Colonel Sun with the new series look (this is a rare one), and finished off the year with a tie-in edition of Diamonds are Forever featuring movie poster art. 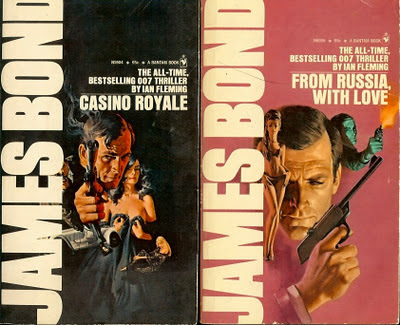 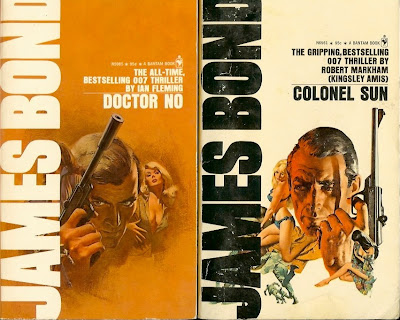 Bantam came back in June 1972 with a new edition of Goldfinger featuring McCarthy artwork that offered a rare glimpse of nudity. While they kept the "All-Time" tag, they didn't continue the series look, but instead established a new visual link -- first established on their Diamonds Are Forever tie-in -- of featuring the 007 movie logo on the backs of the books. In March 1973 they released Moonraker with the 007 logo backing and the same font as their DAF tie-in, but with very different "mod" cover art by an uncredited artist (which I still love as representative of its time). Perhaps had they continued the series we would have gotten more mod Bond covers like this? 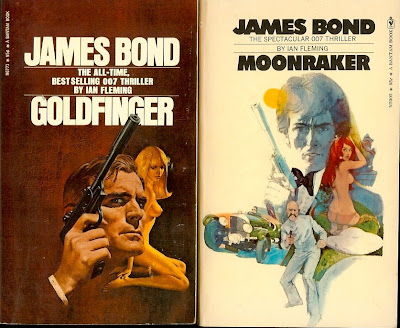 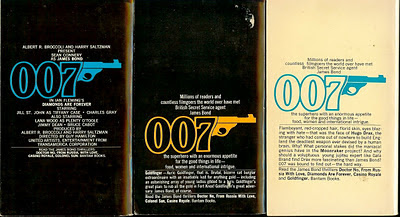 Bantam concluded their run with a Live and Let Die tie-in released in July 1973. Ironically, this one would not feature the 007 movie logo on the back.
Speaking of movie art, elements of McCarthy's Colonel Sun artwork would later find their way onto the Thai poster for Never Say Never Again (1983).
Bantam U.S. paperback publication order: