, has been released by Pegasus.

The collection includes the novels Zero Minus Ten, The Facts of Death, The Man With The Red Tattoo, and the short stories "Live At Five" and "Midsummer Night's Doom." Until now, "Live At Five" had only been available in a 1999 issue of TV Guide.

can be purchased at Amazon.com

. For news about Raymond's current and upcoming original work visit his official website.
Posted by The Book Bond at 5:46 PM No comments:

Email ThisBlogThis!Share to TwitterShare to FacebookShare to Pinterest
Tags: Anthologies, Raymond Benson, Short stories, The Facts of Death, The Man With The Red Tattoo, Zero Minus Ten 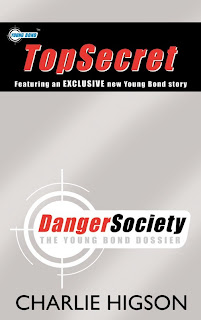 , which was recently released in paperback in the UK, will be released in any form in the USA.

I confirmed at Comic Con that there are still no plans by Disney to publish this latest Young Bond release. However, they did spark to my suggestion that they consider including the original Charlie Higson short story, “A Hard Man To Kill”, in their paperback edition of By Royal Command

, due out in May 2011. (Of course, they might have just been humoring this mad fanboy.)

The good news is the UK paperback edition of Danger Society The Young Bond Dossier is currently 38% off at Amazon.co.uk, so U.S. fans who want this excellent book can purchase it for about the same total price as a U.S. hardcover.
Posted by The Book Bond at 7:44 AM No comments: