Our friends at Puffin Books have given us an exclusive first look at this spectacular new promotional poster for the paperback edition of Charlie Higson’s Hurricane Gold. The book is set for release on May 28, the 100th anniversary of the birth of Ian Fleming. As previously reported, the paperback will include a preview extract of the fifth Young Bond novel, By Royal Command. 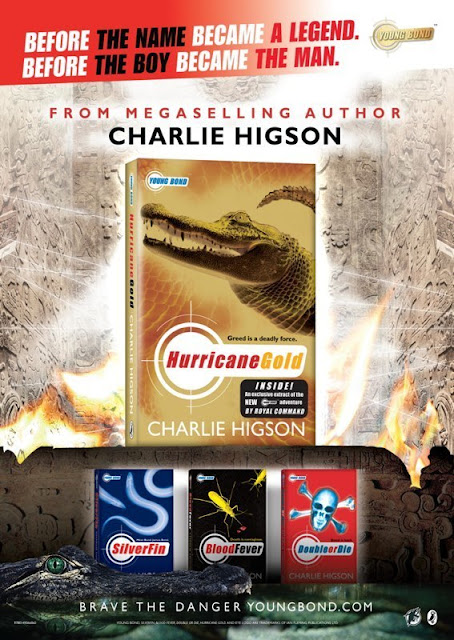 May 28, 2008 is going to be a big day for Bond fans young and old. In addition to the Centenary and Hurricane Gold, the day will also see the release of an all-new adult Bond novel, Devil May Care by Sebastian Faulks.

Charlie Higson will launch the paperback Hurricane Gold with a personal appearance at the Hay Literary Festival in Hay-on-Wye. He will then embark on a UK book tour. No word yet on a launch event for Devil May Care, but certainly IFP and Penguin have something cooking for the big day.

Speaking of the big day, I will be traveling to the UK during the Centenary week and will provide full coverage and a gallery of pics of all the exciting Young Bond and Centenary events. 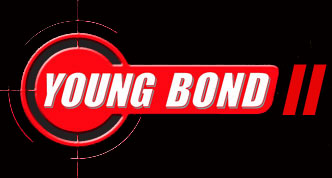 Charlie Higson told BBC News today that a second cycle of Young Bond books is a possibility, but cautioned it would only happen after he’s taken a break to complete some other non-Bond projects.

“I want to have a break and do some other stuff for a while. But I'd love to come back and write some more.” Higson told the BBC. "One thing I've been talking about possibly doing is a second sequence of books...maybe taking him up to and into World War II.”

Higson says a second series would be aimed at a “slightly older readership” than his first cycle of books that concludes with By Royal Command in September.

“He's approaching the age of 15 in this latest book and I couldn't continue writing this type of book for this age group with Bond at the age he is,” says Higson.

“The question of sex is the hardest thing - one of the facts we get from one of Bond short stories is that he lost his virginity aged 16 in a brothel in Paris. I don't think I can quite get away with that for a 10-year-old reader.”

Asked if the French brothel would feature in the first of the new “older Bond” books, Higson said: “It would certainly be part of the next sequence - I think we would see a bit more of what was going on there.”

He added: “It's been fantastic writing these books, I would hate to sever my partnership with the world of Bond. I know quite a lot of the Fleming family now, and they're all fantastic.”

But Young Bond fans shouldn’t pop the champagne corks just yet. I can confirm that Ian Fleming Publications have not commissioned any further Young Bond novels and are currently concentrating on the centenary year, which includes By Royal Command and the SilverFin graphic novel. So, at the moment, a Young Bond Series II is just a beautiful dream.

Ironically, almost exactly a year ago, I speculated on what a second Young Bond series could look like HERE.
Posted by John Cox at 10:01 AM No comments:

Young Bond returns to the USA

Young James Bond is BACK in the USA in Charlie Higson’s third Young Bond novel, Double or Die. Released today by Hyperion Books for Children, the UK bestseller finds James searching for a kidnapped teacher in the darkest and most dangerous corners of 1930s London. (Click for review) 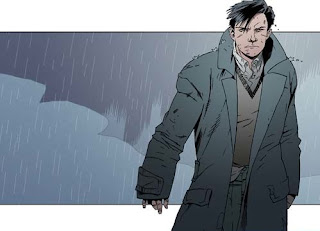 The new Double or Die U.S. hardcover sports breathtaking cover art by Kev Walker (who will provide artwork for the SilverFin graphic novel later this year). An unabridged Double or Die audiobook read by Nathaniel Parker is also released today by Random House as a 7 CD set ($37.00) and as an audio download ($18.95).

Says author Charlie Higson, “Double or Die is a new start for Young Bond in the states and I’m very excited about its release.”

Posted by The Book Bond at 3:12 PM No comments:

U.S. covers for Devil May Care and Quantum of Solace

Cover art for the U.S. editions of Devil May Care

by Sebastian Faulks and the Quantum of Solace 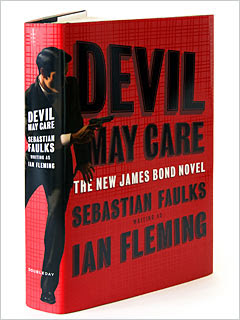 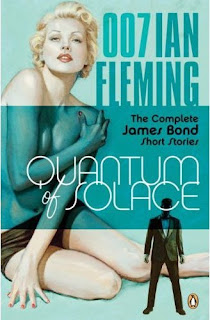 Email ThisBlogThis!Share to TwitterShare to FacebookShare to Pinterest
Tags: Cover art, Devil May Care, Film tie-in, For Your Eyes Only, Ian Fleming 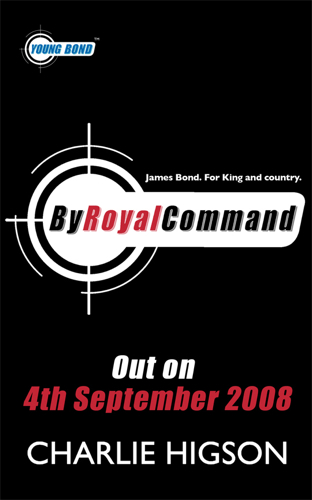 Following a treacherous rescue mission high in the freezing Alps, James Bond is preparing for life back at Eton. But James is under surveillance; his every move is being watched. He alone holds the clue to a sinister plot that will bring bloodshed and carnage to his school - and his country.

Forced to flee from Eton to Austria, James must leave behind everything he knows, with only a beautiful - and dangerous - girl by his side.

Soon he is trapped in a deadly war of secrets and lies, as a nightmare reunion with a bitter enemy plunges him once more into the face of death.

Life for James Bond will never be the same again.

By Royal Command will be released in the UK as a hardcover and audiobook on September 4, 2008.
Posted by The Book Bond at 9:07 AM No comments: 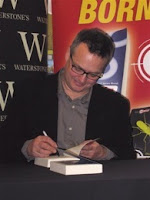 Disappointing news today for U.S. Young Bond fans. It appears Charlie Higson will not be making a U.S. book tour promoting the release of Double or Die.


Charlie previously “crossed the pond” for the releases of SilverFin and Blood Fever.

Double or Die will be published by Hyperion Books for Children on April 22. An unabridged U.S. audiobook from Random House is scheduled for release on the same day. Says Charlie Higson, “Double or Die is a new start for Young Bond in the states and I’m very excited about its release.”

Source: The Young Bond Dossier
Posted by The Book Bond at 10:12 AM No comments: