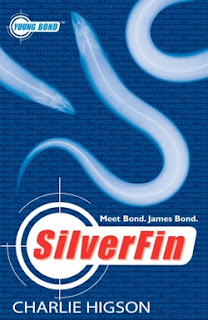 , the debut Young Bond novel by Charlie Higson, is a well-written “boy’s adventure”-type book that will please its pre-teen target audience. It should get glowing reviews, and Ian Fleming Publications should be very happy with author Higson’s hard work. While there is some gruesome violence in SilverFin, mothers can rest assured that there is not a whiff of sexuality within its 372 pages (the longest James Bond novel yet written). In these regards, Young Bond #1 is a resounding success.

However, this is a James Bond site run by fans for fans. We know our Bond and we know our Fleming. The juggernaut of SilverFin publicity has promised the book will "appeal to new readers and James Bond fans alike."

While Bond fans can certainly enjoy SilverFin as a well-written adventure book, they may have a slightly harder time embracing it as “A James Bond Adventure.” But make sure you read this review to the end because there IS a twist.

Critics complained that John Gardner and Raymond Benson could never step free of the shadow of Ian Fleming in their 007 “continuation novels.” The good news is Charlie Higson has finally stepped clear of that shadow…the bad news is he’s landed squarely in the shadow of J.K. Rowling. Far too much of SilverFin reads like a Harry Potter clone, and this will initially be the most difficult aspect for Bond fans to get past.

After a thrilling opening prologue that would not be out of place in a legitimate…err, I mean, adult James Bond novel, we meet young James (Higson’s elects to call him “James” instead of the traditional “Bond”) as he arrives at Eton in the 1930s. James is polite and self-effacing, gets lost “at least twice a day” on his way to class, and feels fear when confronted by bullies. Even though he’s described as tall for his age and athletic, he lacks competitive drive (not to mention killer instinct). James loses almost every Eton sporting competition he enters — which doesn’t seem to trouble him in the least. In fact, he is quite pleased to place 7th (get it?) in a shooting competition. While James is supposed to be 13 in this book, he reads much younger. Are “monsters in the dark” still a concern of 13-year-olds? In short, the James Bond of the first two thirds of SilverFin is a bit of a wimp. This is clearly NOT Fleming’s Bond. It’s not even Roger Moore’s Bond. But keep reading…

SilverFin is divided into three parts. Part I chronicles Bond’s life at Eton and involves a series of confrontations and competitions with brutish blonde American George Hellebore. At Eton the agreeable James quickly gathers a collection of colorful and diverse friends: an Indian boy, a German-Jewish boy, a boy from Hong Kong, a lovable chubby tuba player… Maybe it’s a foretelling of James’s amazing gambling luck that he would draw the only living quarters that didn’t contain a single Englishman. On the one hand, this works as a motivator of Bond’s future worldliness; on the other, it feels like pandering to a “politically correct” mentality and, again, to the Harry Potter crowd. While clearly very well researched, and despite the highlight of an exciting chapter-long foot race, this first section of SilverFin is a bit tedious and one hopes Higson will get young Bond bounced out of Eton sooner than later.

Bond breaks free of the Eton section and heads to Scotland in Part II, where the real SilverFin adventure begins. But just when you thought you were free of the Potter formula, Bond is instantly teamed with a talkative red-haired Irish companion ("Red") and the spunky girl of the story, Wilder Lawless. In what is certainly a low point of young Bond’s masculine development, upon meeting James, Wilder wrestles him to the ground and shoves leaves into his mouth. (There’s talk of this bizarrely humiliating moment being cut from the U.S. version.)

On a more positive note, the villain of the story, Lord Randolph Hellebore, is well drawn and his caper is teased out very effectively. (It’s a curious feature of SilverFin that, when Higson is free of young James, the book improves dramatically. One of the best chapters in the novel is told entirely from the point of view of Hellebore’s abused son, George.) Hellebore is American and shares a worldview consistent with the recently empowered Nazis. He makes bizarre speeches and could give Hugo Drax a run for his money in a debate on master race theory.

Many of Higson’s Bondian biographical touches, found mainly in this second section, may come off as a bit too cute for hardcore James Bond fans. Bond’s uncle Max teaches young James to drive in an early model Aston Martin (a Bamford & Martin Sidevalve Short Chassis Tourer). Bond’s love of Bentley motorcars, we discover, is rooted in the fact that his Aunt Charmian drives a 4.5 litre (the same car Bond drives in Casino Royale). Bond’s attraction to martinis (shaken, not stirred) has, apparently, nothing to do with the need to dull the guilt and fear that comes with being a paid assassin. Now, when we see 007 order his signature drink, we can assume his mind is drifting back to the memory of Wilder Lawless and her horse named, yep, “Martini.”

While the first two thirds of SilverFin may shake and stir old guard Bond fans, know that it is also by design. It’s no spoiler to say Young Bond #1 is a story of transformation and that, by the end of the novel, the timid boy has via his experience found his 007 steel and menace. If nothing else, this book HAD to be that. And when Bond finally shakes off his yammering Potteresque companions, the action of the final third of the book is downright thrilling! Higson knows how to write, and he weaves horror and sci-fi elements into the story very effectively. You’ll never look at an eel the same way again after reading SilverFin.

It’s in this final section that Higson shows us the true potential of a Young Bond series. Age becomes far less of a factor when Bond is facing off with a madman, or on his own battling for his life in the waters beneath a Scottish Castle. It’s here Higson begins to channel Fleming at his best, and it’s here that SilverFin becomes, yep, A JAMES BOND ADVENTURE! (There is also an interesting twist to Bond’s transformation that could have Bond chat boards buzzing for some time to come.) For this reviewer, the final third was a last minute save; a rousing return to Bondian basics with a dash of sci-fi horror thrown in. And when the bullies back at Eton see something “cold and frightening” in young Bond’s eyes, I suddenly found myself looking forward to Book 2 in a major way. Like young Bond himself, I was transformed in the end by SilverFin.

Bond fans gave the concept of Young Bond series a pretty rough reception when it was announced last summer. Asking 007 fans to embrace a kid-safe revisionist history of our “sexist misogynist dinosaur” may be asking too much. So for those fans predisposed to not liking the Young Bond series, know that SilverFin will probably not change your mind and maybe it’s best to skip it. For fans curious about 007′s past, but wary of getting it from a children’s book, I recommend seeking out a secondhand copy of John Pearson’s superb James Bond: The Authorized Biography of 007

, which offers up a more interesting — or, at least more adult — version of young Bond’s upbringing.

But for those fans, like myself, who have enjoyed the various “continuation novels” and are willing to gamble on this Young Bond series, SilverFin will satisfy. It’s a good start. One just hopes Higson will shake off the Harry Potter contrivances and edge back toward that shadow of Ian Fleming in Book #2.
Posted by John Cox at 1:18 PM No comments: