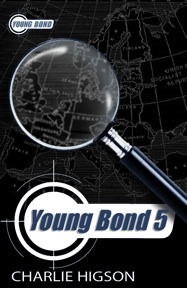 Charlie Higson checks in today with a MAJOR update on his fifth and final Young Bond novel:

Progress: Charlie has been writing the book in Italy for the past month and despite the added time crunch created by publishing two Young Bond novels in 2007, he will deliver his manuscript only a week behind schedule. The book will be released in the UK as promised on September 4, 2008.

Plot: Not long ago we speculated that Charlie could echo a scene Ian Fleming’s From Russia With Love in which Bond remembers rock climbing with some University friends in The Alps. While that memory is of a later time in Bond’s life, Charlie confirms that those friends will make a “very brief” appearance. However, the major Fleming echo in YB5 will be the inclusion of Hannes Oberhauser, Bond’s climbing and skiing instructor whom Bond later referred to as “something of a father to me at a time when I happened to need one.” Oberhauser was later murdered by Major Dexter-Smythe in Octopussy. Charlie says Oberhauser will be an important part of Young Bond 5.

Title: Yes, we have a title! Charlie reports that the final title has been selected, and that it is not The Shadow War, Diamond Rain, Dynamite Kiss, or any of the other working titles. While it can’t be revealed just yet, Charlie says the title is very Flemingesque and that he’s very pleased with it.

Looks like fans will get a preview of the next Young Bond adventure as early as May 28. That’s the day the paperback edition of Charlie Higson’s Hurricane Gold is released, and according to newly released cover art, the book will include an exclusive extract from Young Bond 5!

While the U.S. paperback edition of SilverFin featured a Blood Fever extract, this is a first for a UK paperback.

Young Bond 5 will be released in hardcover on September 4, 2008. Charlie Higson is currently hard at work on this final Young Bond novel.

Posted by The Book Bond at 3:27 PM No comments: