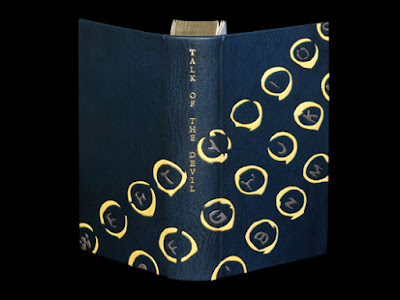 At more than 400 pages Talk of the Devil is the longest work ever to bear Ian Fleming’s name.
Posted by The Book Bond at 11:49 AM 3 comments:

Moneypenny makes it to America

Samantha Weinberg's excellent series of Miss Moneypenny novels are at long last making their way to America. Book 1, The Moneypenny Diaries, is published by Thomas Dunne Books and can be purchased now on Amazon.com

Weinberg's "Diaries" comprise a trilogy of novels, all three of which have been released in the UK. No word yet on when the next two books, Secret Servant and Final Fling, will make it across the pond.

Read my exclusive interview with Samantha Weinberg aka "Kate Westbrook" HERE.
Posted by The Book Bond at 11:10 AM 2 comments:

Birthplace of 'Devil May Care' 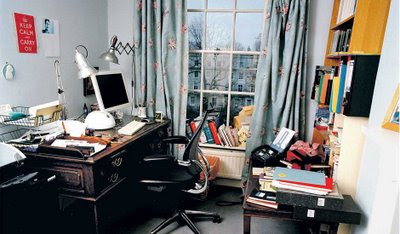 "I have worked in this room for six years. I wrote novels called Human Traces, Engleby and Devil May Care here, and have nearly finished a new one, provisionally called A Week in December. The room is part of a small flat in Holland Park, in west London. It's at the top of a building so there's no noise from above. I come here from home, 15 minutes' walk away, from roughly 10 till six every weekday. I sometimes stay later or come in at the weekend as well, so I guess I must like it here.

It faces east and overlooks a garden square with a pink horse chestnut. The room is not as seedy as the picture makes it look, though I admit that the decor - if that's not too strong a word - is the subject of some hilarity to female interviewers. I don't care what it looks like, only how it works.

The desk belonged to a furniture dealer called Simon Horn. It's too low to get my knees under, so the middle drawer has gone and the legs are propped up by copies of Charlotte Gray in Danish. The chair I got via the Wellcome Trust; it's the same as those in their library and very good for someone with a chronically painful back. I inherited the curtains from the previous owner.

On the coffee table are books and notebooks relating to the novel in hand. The buff envelope at the front of the upper in-tray on the desk is the next VAT return. The temperamental phone/fax machine doubles, when it fancies it, as a photocopier.

On the wall I face are a small cameo of Tolstoy that I bought in his house in Moscow and a bronze relief of Dickens, half obscured by the computer screen, that was my mother's. For each book I invoke a sort of patron saint. For A Week in December it's Orwell, just visible at two o'clock from Tolstoy. The message of the old wartime poster next to him gives solid advice on a slow day. The bag was a Christmas present from my wife."

Thanks to our friends at Disney Publishing, today we can show you the final cover art for the U.S. hardcover edition of Charlie Higson’s Hurricane Gold, due for release on April 7, 2009. 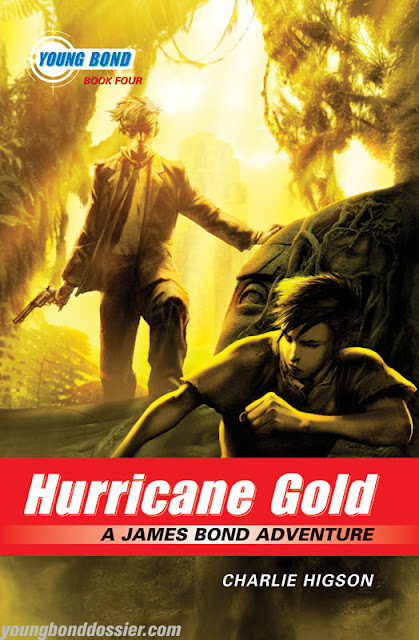 This spectacular artwork is by artist Kev Walker who most recently illustrated SilverFin The Graphic Novel and provided cover art for new U.S. paperback editions of SilverFin and Blood Fever due out in March.

Prototype art for Hurricane Gold, first revealed back in June, showed Bond with Precious Stone in the jungles of Mexico. But in keeping with the new unified “Bond vs Villain” theme, Precious has been replaced with the brain-damaged henchman Manny the Girl.

The Hurricane Gold hardcover is available for pre-order on Amazon.com along with all the new Young Bond releases for 2009:
Posted by John Cox at 8:18 AM No comments: