In February we learned that the location for Young Bond Book 4 -- which had been announced as being set in The Alps -- had been changed to somewhere “hot and exotic.”

Now during an appearance at Foyles bookstore in London, author Charlie Higson has revealed the exact locations; Mexico and the Caribbean.

While James Bond has certainly spent a fair amount of time in the Caribbean, Mexico has received little attention from 007. In Ian Fleming’s Goldfinger Bond reflects on a mission in Mexico (but we do not see it), and while 1989’s Licence To Kill was filmed largely in Mexico, the country doubled for the fictitious Isthmus in South America.

Mexico did feature in two 007 comic strips, The Torch-Time Affair and Death Wing, and in the 1980s role playing game, Goldfinger II: The Man With The Midas Touch. Mexico was also the primary location in Jim Hatfield’s infamous unlicensed 007 novel, The Killing Zone.

Where exactly in Mexico young James will be traveling is not yet known.

If IFP sticks with the current schedule of one book per year, Young Bond Book 4 will be released in 2008.

Thanks to Matt Weston of www.commanderbond.net for sharing this scoop.
Posted by John Cox at 6:42 PM No comments:

Problems with Titans 'Cars of the Gardner Era' extra 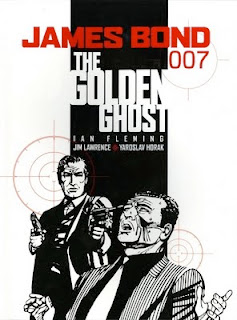 First off, I love these Titan reprints and I'm thrilled they are now doing the original Bond stories. For a Bond fan, this is a dream come true -- original 007 stories not seen since the 70s collected together for the first time. Okay, some of these tales get a little Sci-Fi, but that was the era and they are still fun as heck.

These books also include nice extras. In this latest edition, The Golden Ghost

, we get a look at Bonds cars with a fine article about the cars of the Ian Fleming novels by David Leigh. But then there's a retrospective of the cars of the Gardner era. Now, being a Gardner fan, I was excited about a definitive look at the Gardner cars. Unfortunately, this particular article by James Page is seriously deficient and, for me personally, a little disconcerting.

The article is basically a rehash (i.e., a pretty blatant lift) of my own article about Saabs in the Gardner era first published on CBn in 2004 and later in 007 Magazine. Now, I guess there's nothing wrong with using some of the facts from my article (even though it’s totally unsourced and I was not contacted by the author or Titan about this), but isn't this supposed to be an article about the CARS of the Gardner era? Why so much focus on Saabs? Unless, of course, the only source here was my own article.

For example, reading this article one gets the impression the Bentley Mulsanne Turbo appeared in just one novel, Role of Honor. This isn't true. The Bentley is the car that appears more than any other in the Gardner canon, and plays a major role in Nobody Lives Forever and No Deals Mr. Bond. Yet all the author says about these two books is that "Gardner put Bond back into a Saab." Sure, Bond rented a Saab for two brief sections of these books (which, of course, I noted in my Saab article), but he primarily drove the Bentley. He also rented a BMW in No Deals Mr. Bond. Why no mention of that if rental cars are part of this examination? Maybe because I didn't mention it in my article?

And if we're including rentals cars (and aren't all Bonds cars rentals in a sense), where's the BMW 528i and the Lancia from Win Lose or Die? Or the Toyota Previa from Death is Forever; the BMW from Never Send Flowers; the VW Corrado from SeaFire; and the Ford Taurus from COLD? Not one of these cars gets a mention, yet we do learn M drove a Saab 9000 in The Man From Barbarossa. Again, something that's nice to know when talking about Saabs in the Gardner era (and that's why I noted it in my article), but, again, is this article about Saabs in the Gardner era or the cars? Certainly this valuable space could have been used to talk about even one of the many other cars that Bond drove instead of the one obscure Saab appearance noted in my article (notice a pattern here?).

And what about Bond's second Bentley? Gardner upgraded Bond's Bentley to a Turbo R in a later book. For an article that's supposed to be a definitive look at the Gardner "cars," this is a pretty shocking omission! I've always wondered if this second Bentley was actually a new Bentley or a mistake in name. Raymond Benson carried it over into his books as new car. This would have been something interesting to at least note or, better yet, do a little research and solve the mystery. Of course, I didn't tackle this in my Saab article because it wasn't relevant. Mr. Page doesn't mention the existence of the second Bentley in his "cars of the Gardner era" because...well...I think we can now figure that one out.

Let's hope Titan is a little more careful with future contributions (and contributors).
Posted by John Cox at 8:48 AM No comments: 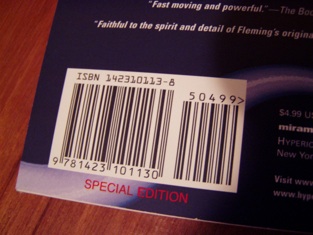 As the SilverFin paperback slithers onto store shelves in the U.S., the Young Bond Dossier and CommanderBond.net have uncovered something that will be of great interest to Young Bond fans and Bond book collectors in general.

A reported earlier this month, a few copies of the U.S. SilverFin paperback slipped out early and were spotted on eBay. It was noted these copies included a 5-page preview of Blood Fever. Well, it now appears these mysterious eBay copies were actually a rare "Special Edition" and only these Special Editions contain the Blood Fever preview!

This SilverFin “Special Edition” is also slightly smaller than the standard issue, it has a different price ($4.99), and a different ISBN. In addition, the words "Special Edition" appear in red below the barcode on the back of the book and the inside flap.

So what’s the story with these? Beats me, but this is the kind of thing that makes collecting fun (or frustrating, depending on your point of view).

UPDATE: Mystery solved? I contacted the original eBay seller who said she got her copies from the Scholastic warehouse. Check out THIS PAGE on the Scholastic website. It looks like SilverFin was a special "Scholastic book fair" selection. Note the "special price." Sounds like this could be our Special Edition.

This means the book would only be available to schools (the eBay seller probably got the unsold stock). But how many were printed? Only time will tell how rare this particular SilverFin paperback will become.
Posted by John Cox at 6:39 PM 1 comment: