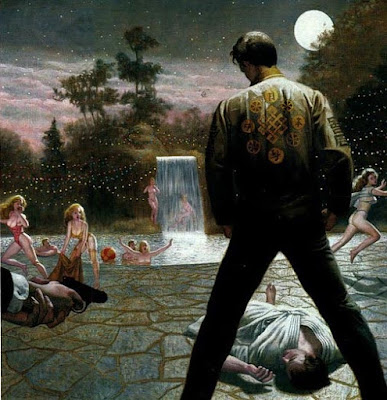 The sad news this week is that Hugh Hefner, legendary founder of Playboy, has died at age 91. Hefner was a big fan of Ian Fleming and James Bond and did a great deal to popularize the super spy in America in the 1960s.

Playboy continued it's James Bond association by featuring a Bond Girl pictorial for almost every film of the 1970s and 1980s. Then in January 1997, the literary James Bond returned with an original short story, Blast From The Past, penned by new James Bond continuation author Raymond Benson. This was followed by excerpts of his Bond novels Zero Minus Ten (April & May 1997), The Facts of Death (July 1998), and Doubleshot (June 2000).

But perhaps the greatest fusion of James Bond and Playboy came in the January 1999 issue with an original story by Benson that featured 007 at the Playboy Mansion in Los Angeles. Bond even meets Hugh Hefner himself!

Raymond discussed the story with me in our 2004 CBN Interview.

This story was done in-between The Facts of Death and High Time to Kill. It was summer of 1998 and I was in the middle of writing HTTK. Playboy was about to celebrate its 45th anniversary with the January 1999 issue, which they were already planning and putting together. (They must have all the material for an issue at least four months prior to its publication, and the issue usually hits the stand one month before the cover date; thus the January 1999 issue is actually on sale in December 1998).

I honestly can’t remember who thought of doing a Bond short story again for the 45th anniversary issue, but I suggested doing a sort of humorous tale in which Bond meets Hugh Hefner. Since Hef was a huge Bond fan, had published Ian Fleming, and lived a Bondian lifestyle–and Bond was the ultimate playboy–it seemed to make sense. At least it was a nudge, nudge, wink, wink concept that everyone felt was appropriate. In the summer of 1998, Hef was about to throw the first “Midsummer Night’s Dream” party in five years–the last one was in 1993, I think–in which the guests must arrive in sleepwear. He had just separated from his wife Kimberley and was in party mode. He was also living with three blonde girlfriends. So it was to be a big event, with 1000 people invited.

I think it was Hef’s personal assistant that suggested setting the story at the Midsummer Night’s Dream party. This is now an annual event, held the first weekend of every August. Since Hef would appear in the story as himself, it also made sense to feature two real-life Playmates as the Bond-girls. Hef’s office put me in touch with Lisa Dergan, Miss July 1998, and Victoria Zdrok, Miss October 1994. I had wanted a Russian girl and Victoria fit the bill–I actually requested her. Lisa was suggested by Hef’s office. I interviewed them both by phone and then met them in person later on several occasions.

I wrote the first draft of the story in July but I needed to fill it in with authenticity. So my wife and I were invited to attend the pajama party! It’s safe to say that it was the party to end all parties–at least from our limited perspective. The women wore lingerie and the men wore pajamas and it was just as I describe in the story. The food and drink was fantastic and the eye candy was phenomenal. It was a fairly surreal experience–at one point, around 3am, my wife and I found ourselves on the dance floor two feet away from the likes of Jim Carrey, Leonardo DiCaprio, and Pamela Anderson. We met all sorts of other celebrities and Hollywood’s beautiful people. It was certainly a unique research trip.

Back home, I finished the story quickly and turned it in before the end of the month. Other celebrities and real people are mentioned in the story, but the villain’s name was based on my good friend Doug Redenius, the vice president of the Ian Fleming Foundation. I called him “Anton” Redenius in the story. As I said before, this story wasn’t meant to be taken seriously–it was all in good fun. 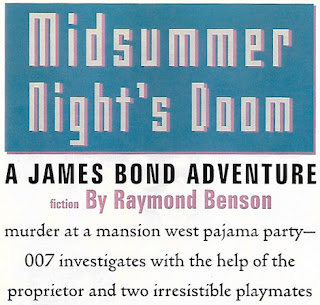 Midsummer Night's Doom appeared in the January 1999 issue of Playboy with artwork (at the top of this post) by John Rush. It was also included in the 2010 book, Choice of Weapons.

You can read Raymond Benson's own personal tribute to Hugh Hefner at CinemaRetro.

Continuing our look back at the 1985 UK Coronet paperbacks, here's Icebreaker, my favorite John Gardner Bond novel and another great cover. 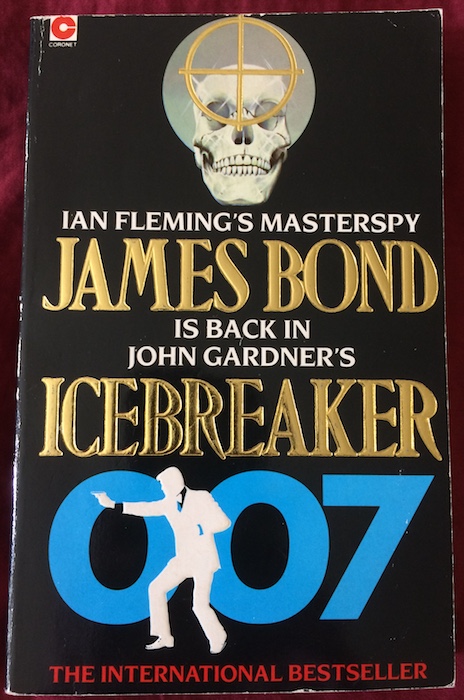 Check out the 1985 Coronet Licence Renewed, For Special Services, and Role of Honour.
Posted by John Cox at 5:58 PM No comments: 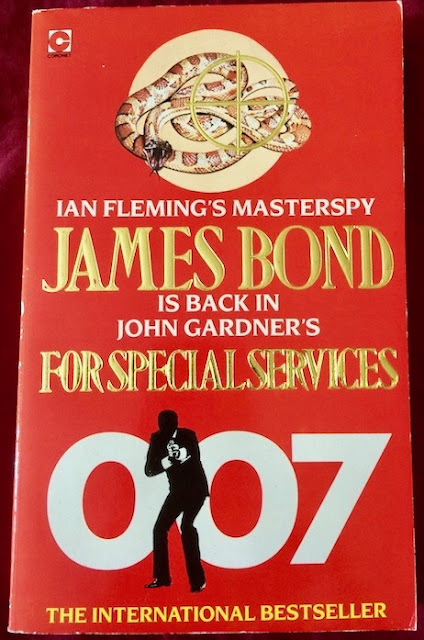 Check out the 1985 Coronet Licence Renewed and Role of Honour.
Posted by John Cox at 10:38 AM 5 comments: 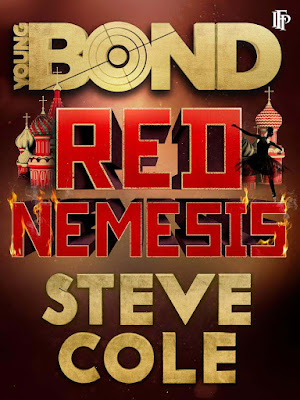 My Role of Honour 1985 Coronet paperback post seemed popular, so here now is the 1985 Coronet Licence Renewed. This was the third paperback incarnation of Gardner's first James Bond novel. Another cool cover, IMO. 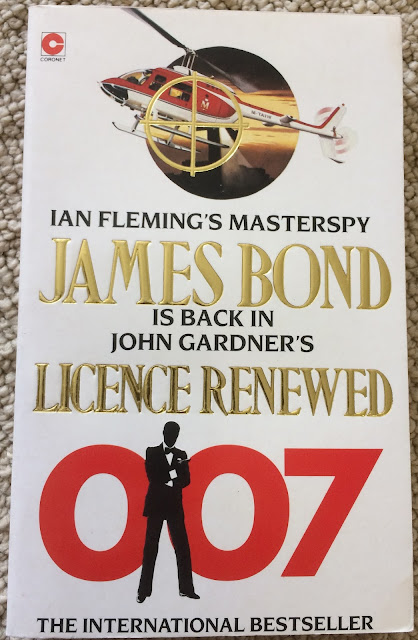 It's been a while since I've had any news to post, so I thought today I'd share a favorite cover. I'm a sucker for covers that show Bond's car, and the new Bentley Mulsanne Turbo was a big part of John Gardner's fourth Bond adventure, Role of Honour, so this was a great choice of image. 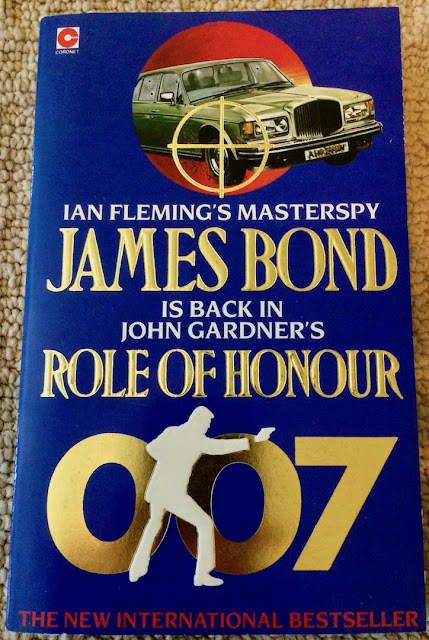 This cover was among a batch of Gardner UK paperback revamps from Coronet released in 1985. If things stay slow, I'll share some more!
Posted by John Cox at 12:06 PM 9 comments: