Okay, here's one I know many have been waiting for -- the U.S. movie tie-in editions and novelizations. It's a Bond literary tradition that goes back to the start of the film series in 1962 that the corresponding Fleming novels would be reissued in new editions that feature the film on the cover in some way. While various publishers took over tie-in duties, I'm treating these as their own "set". They start off straight forward enough, but things start to get tricky as the filmmakers started using short story and original titles. But before I get into the details, here are the paperbacks laid out in all their cinematic splendor. 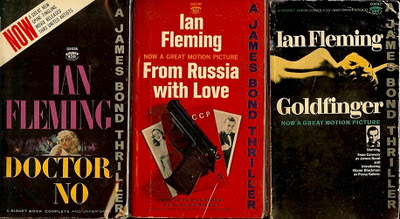 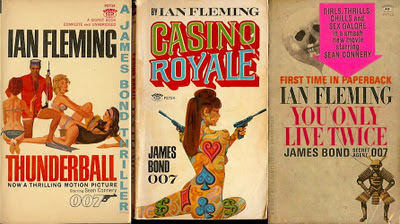 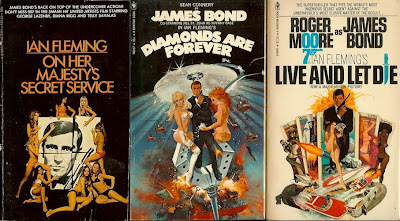 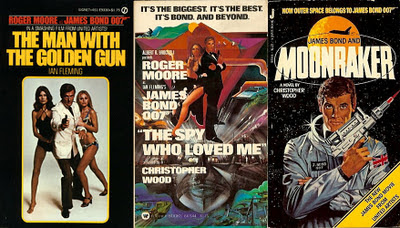 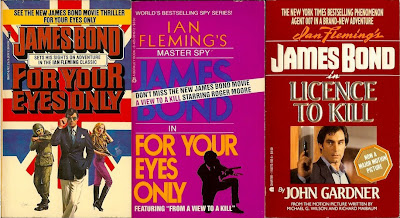 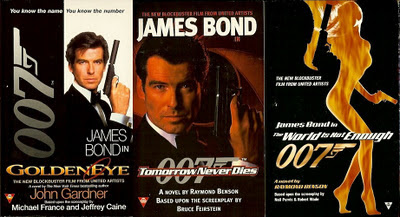 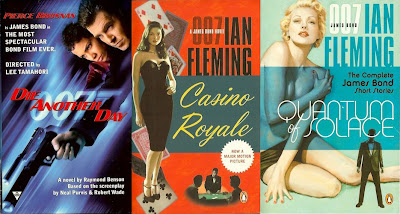 Signet, who published all the Bond novels in paperback in the U.S., created movie tie-in editions for eight films total. A standout among the Signet tie-in's is You Only Live Twice (1967). For some reason, Signet did not create new cover art with poster imagery, but instead simply added a pink sticker to the cover of their standard paperback edition. Interestingly, you can also find copies of Signet's series Casino Royale with a tie-in sticker, even though they also did a proper tie-in cover with the '67 film.

Bantam, who took over paperback publishing duties from Signet in the '70s, released Diamonds Are Forever (1971) and Live and Let Die (1973) in nice paperback tie-in editions. A hardcover book club edition of Diamonds was also released with this movie cover. Because Signet had retained the rights to the last four Fleming books, they returned to do the official tie-in for The Man With The Golden Gun in 1974 (I believe this cover was the first image I ever saw of the flesh and blood James Bond 007).

Ian Fleming did not want his 10th book, The Spy Who Loved Me, adapted into a film apart from the title, so likewise no tie-in was done. Instead screenwriter Christopher Wood wrote the first "novelization" of a Bond film under the title, James Bond, The Spy Who Loved Me. It was released by one-time Bond publisher Warner Books. The novelization idea appears to have caught on and Wood returned to write a novelization of the next Bond film MOONRAKER (1979). This book was the first to be published by the new Bond publisher, Jove Books, under the title, James Bond and Moonraker.

Tie-in’s returned with 1981's "back to basics" Bond film, For Your Eyes Only. Jove Books released this collection of Fleming short stories as the last book in their paperback series with a banner touting the Roger Moore movie. Marvel also released a mass market paperback of their comic book adaptation. Signet did not do a tie-in for Octopussy (1983), the 13th Bond film. Unsurprisingly, no one went near the legal quagmire that was the unofficial Thunderball remake, Never Say Never Again (1983) with Sean Connery.

New paperback publisher Berkeley would reissue a copy of their colorful For Your Eyes Only series paperback in 1985 with a banner announcing the last Roger Moore Bond film, A View To A Kill -- although some might consider Ballantine's four Fine Your Fate paperbacks as the true tie-ins for that particular film. AVTAK was also novelized, in a fashion, by Judy Alexandrer as The James Bond Storybook of the Movie A View To A Kill (right). The kid friendly book was published by Grosset & Dunlap and the copyrighted page does list Glidrose Publications, so...

When the ball came back to Signet, they again passed on doing any kind of a tie-in for Timothy Dalton's 1987 debut Bond film, The Living Daylights (a title that's part of the Octopussy collection). This is a great shame because a look at a German tie-in edition shows us what could have been.

Novelizations returned with a vengeance for 1989s Licence To Kill (see what I did there?), the first Bond film to carry a non-Fleming title. Official continuation author John Gardner penned the book, which was published by Charter using a combination of movie artwork and the paperback series art that included the somewhat odd cover blurb: "Now a Major Motion Picture" (as if it had ever been anything else?). Licence To Kill would be the only novelization to be published in hardcover in the U.S. Not only is there a hardcover book club edition, but The Mysterious Press in New York published three different hardback editions (four if you include the special 26 "lettered" editions of the maroon cover), although their dust-jacketed edition was created primarily for sale in the UK.


John Gardner came back to novelize Pierce Brosnan’s first Bond film, GoldenEye (1995). Raymond Benson, who took over continuation novel duties in 1997, provided novelizations for Tomorrow Never Dies (1997), The World Is Not Enough (1999), and Die Another Day (2002). All the Brosnan Bond novelizations where published by Boulevard Books.

Daniel Craig's debut Bond film Casino Royale (2006) marked a return to Fleming titles, and also marked the return of the traditional tie-in. Penguin, which had released all the Fleming books as trade editions in 2002 with attractive retro covers, released a new mass market edition of Casino Royale with a cover blurb saying, "Now A Major Motion Picture". For Quantum of Solace (2008), IFP took the unique step of creating a new collection of Ian Fleming short stories under this title. This can be thought of as the ultimate tie-in, although the U.S. edition by Penguin doesn't actually refer to the film at all.

Finally, there are several curious "hybrid" editions that are worth seeking out. As you can see by the photos below, these hybrids features the movie art, but all text referencing the films is stripped away. So far I've seen hybrid editions of Signet's Doctor No, Thunderball, and On Her Majesty’s Secret Service.


So what might IFP and Eon have planned for Skyfall next year? That's open for speculation.

Click here to see the UK James Bond tie-in editions.
Posted by John Cox at 10:56 AM