IFP has refreshed the covers of all five Charlie Higson Young Bond novels for their Kindle eBook editions. The new covers match the art on Kindle edition of Steve Cole's Shoot To Kill. Love these.

Click to read THE SECRET HISTORY OF YOUNG JAMES BOND
Posted by John Cox at 10:21 AM No comments:

Is there a new unofficial James Bond book out there?

The new anthology, Licence Expired: The Unauthorized James Bond, was scheduled for release yesterday in Canada. Amazon.ca still shows the book as not yet released, but publisher ChiZine appears to have had a launch party in Toronto. Have any of our friends in Canada spotted one in bookstores? 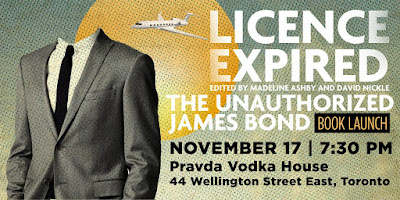 Here's a rundown on the book (explaining how it even exists) as well as a listing of all the stories and authors from ChiZine: 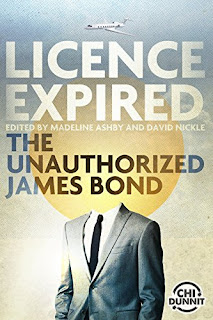 In Paris, James Bond meets his match over appetizers and cocktails—with an aperitif of industrial espionage and chilly sadism. Off the coast of Australia, he learns about a whole new level of betrayal under the scorching light of a ball of thunder. In Siberia, he dreams of endless carnage while his fate is decided by one of his most cunning enemies and perhaps the greatest of his many loves.

In January 2015, the world’s most famous secret agent entered the public domain in Canada—one of the few remaining countries in the world that subscribe to the Berne Convention and allow copyright to extend not 70 but just 50 years past the death of the work’s creator. Licence Expired: The Unauthorized James Bond, lives in this shadow space of copyright law: a collection of 19 new, exciting, transformative James Bond stories by a diverse crew of 21st-century authors.

Collected herein are new stories about Secret Agent 007, as the late Ian Fleming imagined and described him: a psychically wounded veteran of the Second World War and soldier of the Cold War, who treated his accumulated injuries with sex, alcohol, nicotine, and adrenaline. He was a good lover but a terrible prospect.

He was James Bond.

And in Licence Expired, James Bond is back.

Introduction by Matt Sherman
• Foreword: The Bitch is Dead Now by David Nickle
• “One Is Sorrow” by Jacqueline Baker
• “The Gale of the World” by Robert J. Wiersema
• “Red Indians” by Richard Lee Byers
• “The Gladiator Lie” by Kelly Robson
• “Half the Sky” by E.L. Chen
• “In Havana” by Jeffrey Ford
• “Mastering the Art of French Killing” by Michael Skeet
• “A Dirty Business” by Iain McLaughlin
• “Sorrow’s Spy” by Catherine McLeod
• “Mosaic” by Karl Schroeder
• “The Spy Who Remembered Me” by James Alan Gardner
• “Daedelus” by Jamie Mason
• “Through Your Eyes Only” by A.M. Dellamonica
• “Two Graves” by Ian Rogers
• “No Mr. Bond” by Charles Stross
• “The Man with the Beholden Gun: an e-pistol-ary story by some other Ian Fleming” by Kathryn Kuitenbrouwer
• “The Cyclorama” by Laird Barron
• “You Never Love Once” by Claude Lalumière
• “Not an Honourable Disease” by Corey Redekop
• Afterword by Madeline Ashby


Licence Expired: The Unauthorized James Bond  is listed on Amazon.ca and Indigo.ca, although it appears it cannot be purchased if you have an address outside of Canada.

UPDATE: The book is indeed released, but get getting a copy outside Canada is a bit of a trick. Amazon.ca will only ship to addresses within the country. But copies are starting to circulate via secondhand dealers. Happy hunting!
Posted by John Cox at 5:19 PM 3 comments:

Check out the cover for the Finnish edition of Trigger Mortis by Anthony Horowitz from publisher Karisto. It certainly does its own thing. Although it does use blueprint feature as seen on the UK edition. 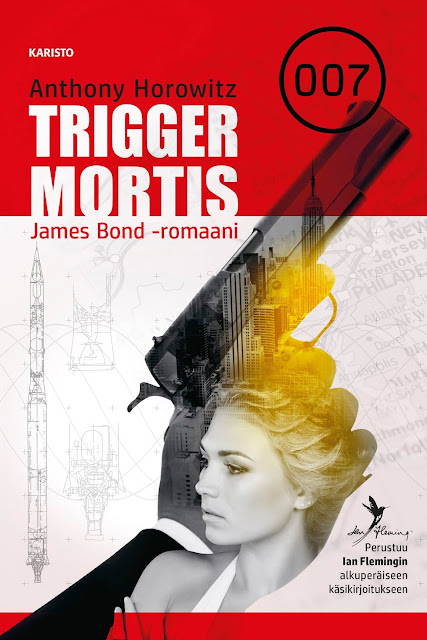 With thanks to James Bond The Secret Agent, the new Swedish Bond blog by Stephan Bäckman.
Posted by John Cox at 4:22 PM No comments:

The final three John Gardner James Bond U.S. reprints from Pegasus Books are being released this week. The books are Never Send Flowers, SeaFire, and Cold Fall (U.S. title). It doesn't appear that Pegasus will release Gardner's two novelizations, License To Kill and GoldenEye, as Orion did in the UK.


Visit our special Gardner Renewed page for links to all the Gardner-Bond reprints in the U.S. and UK.
Posted by John Cox at 9:23 AM No comments:

The first issue of Dynamite Comics new James Bond series is released on Wednesday and Midtown Comics in New York is offering a retro cover exclusive by Robert Hack that I can't resist! Check it out below. 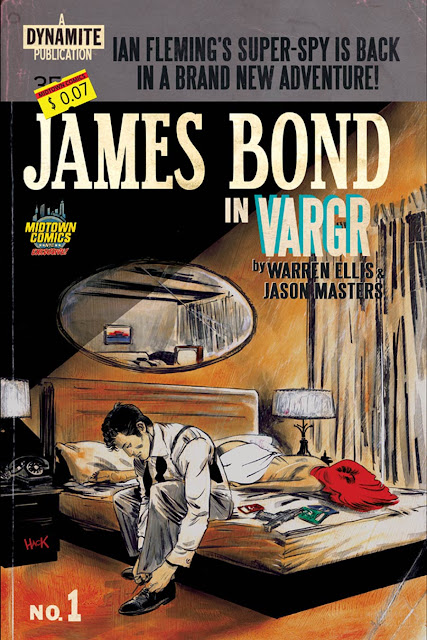 You can order Midtown's VARGR #1 exclusive from the Midtown Comic website.

Thanks to Tanner at the excellent Double O Section blog for this discovery.
Posted by John Cox at 5:41 PM 2 comments: