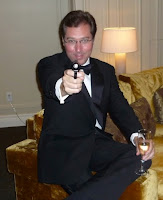 My name is John Cox (aka "zencat"), and I've been a long-time fan of the literary James Bond. My interest was sparked when I read John Gardner's first continuation novel, License Renewed, in 1981. As I devoured each new Gardner book, I also discovered my father's stash of old Ian Fleming paperbacks. Doctor No, On Her Majesty's Secret Service, Casino Royale...the original Ian Fleming books were amazing! And while I enjoyed the movies along with everyone else, I found the Bond of the novels -- the Book Bond -- to be just as exciting. Maybe even more so.

My passion only grew with each subsequent continuation novelist, and I eventually came to know some of the authors and the powers behind the scenes at Ian Fleming Publications. I've contributed to websites such as CommanderBond.net, and have written articles for OO7 Magazine, Collecting 007, and Kiss Kiss Bang Bang. I've also had an essay on Bond appear in the book James Bond in the 21st Century

, and my interview with continuation novelist Raymond Benson is featured in Tied In: The Business, History and Craft of Media Tie-In Writing

For the past several years I've run The Young Bond Dossier, a website devoted to Charlie Higson's superb Young Bond series. I was honored when IFP selected my news to feed the official Young Bond website as well as their own Ian Fleming website. In "real-life" I work in digital cinema quality control. I also write a blog about my other great passion, Harry Houdini.

Now with the launch of a new series of a-list authored James Bond novels, I've turned my attention to this blog, The Book Bond, where I will focus like Goldfinger's laser beam (or buzz-saw if we are talking about the book) on all that's happening in the world of the literary 007.

The Subtext of 007, James Bond in the 21st Century: Why We Still Need 007, Benbella Books/Smart Pop Series, 2006. Essay dissecting the 1964 James Bond classic Goldfinger from the Oedipal point of view. (Amazon)

The Silver Beast, OO7 Magazine, No. 47, October 2005. The definitive history of James Bond’s Saab 900 Turbo as featured in the novels by John Gardner.

The Subtext of Goldfinger, OO7 Magazine, No. 43, July 2004. Article dissecting the 1964 James Bond classic Goldfinger from the Oedipal point of view.

Buying The Real Thing, Collecting 007, No. 20, July 2005. Covering the history and sale of the 1971 Ford Mustang “hero car” from the James Bond film Diamonds Are Forever.

FOUND! Sanchez’ Escape Plane, Collecting 007, No. 20, July 2005. The surprise discovery in the Florida Keys of the Piper plane featured in the 1989 James Bond film Licence To Kill.