The Folio Society has released their next illustrated slip-cased Ian Fleming classic, Diamonds Are Forever. 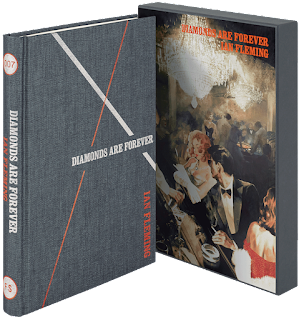 For the fourth book in the Bond series, America is the backdrop for the adventures of Fleming’s hero, taking the reader from the simmering, sulphurous mud baths of Saratoga to the ‘ghastly glitter’ of Las Vegas. It is in the gambling dens of ’50s Vegas – a world of glamour and gangsters – that we see Bond in his element, sizing up the roulette wheel and casually taking the house for everything it’s got. The only Bond novel not to have roots in the Cold War, Fleming makes certain that Diamonds Are Forever has more than its share of larger-than-life villains and set pieces: the dreadful Spang brothers and their associated gallery of thugs, and the ghost town of Spectreville, complete with its very own steam train, are especially memorable. Writing to a friend, Fleming commented with typical humour that for this novel he had included ‘every single method of escape and every variety of suspenseful action that I had omitted from my previous books – in fact everything except the kitchen sink, and if you can think up a good plot involving kitchen sinks, please send it along speedily’. 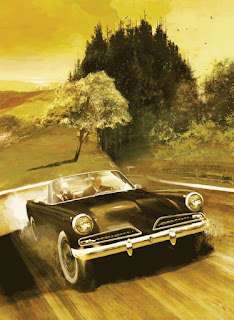 Bond is initially dismissive of American gangs, a stance he quickly comes to regret when faced with their ingenious brutality. His unlikely saviour comes in the delectable form of Miss Tiffany Case, a woman with a bad past and a broken future. Tiffany proves to be one of the series’ most complex and compelling female characters, and with his growing attachment to her, we see a new, more conflicted side to Bond.

Fans of this series will no doubt be excited to see what illustrator Fay Dalton has created with the tantalising combination of Vegas, Bond and Tiffany Case, and they certainly won’t be disappointed. This is the sixth volume in the Folio Bond collection, featuring the distinctive and stylish binding design inspired by the secret agent’s impeccable suits, and a stunning illustrated slipcase.

The Diamonds Are Forever Folio Edition is priced at $56.59 and is available now from the Folio Society website.

Also available are illustrated editions of Casino Royale, Moonraker, From Russia With Love, Dr. No, and Goldfinger. 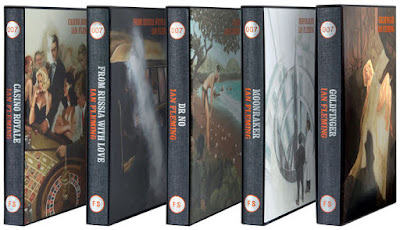 Thanks to Double O Section for the alert.
Posted by John Cox at 11:32 AM No comments:

Double O Section has landed the scoop that a 6-page illustrated short story by James Bond Origin author Jeff Parker and artist Bob Q will appear in the November-December issue of Playboy magazine. Below is part of the Dynamite press release. 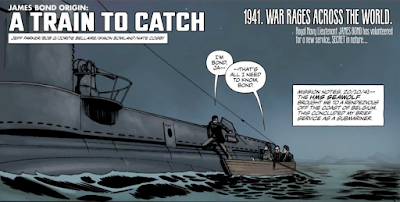 Fans can read an exclusive six-page story from the creative team behind the critically-acclaimed Dynamite series, James Bond Origin, which takes readers back to March 1941 and tells the definitive account of James Bond’s exploits during World War II. The November/December 2018 issue of Playboy will be available at newsstands everywhere October 30th with digital editions available today for desktop and mobile devices through Playboy.com.

Speaking about the opportunity, writer Jeff Parker said, “the team of James Bond Origin recently had the chance to create a short Bond story for Playboy, calling back to the days when the Ian Fleming short stories would run in the magazine beginning with “The Hildebrand Rarity” in the March 1960 issue.”


Thanks to Double O Section.
Posted by John Cox at 5:58 PM No comments: 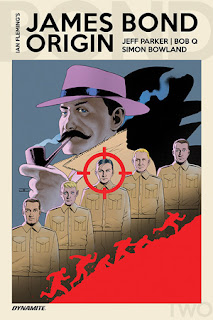 
You can purchase James Bond Origin #2 at Dynamite or Midtown Comics. The issue comes in an assortment of variant covers.
Posted by John Cox at 8:02 AM No comments: