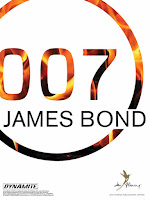 Before the end of the year, author Anthony Horowitz tweeted a teaser pic of the first draft of his new James Bond novel. Today he shares another pic of that draft as he sets out working on his second. Anyone got any Scotch tape?


In a follow-up tweet the author stated: "Bond takes more to get right. Usually two or three is enough."

Anthony Horowitz's new Bond novel will be released by Jonathan Cape in the UK in 2018. You can read the press release HERE.
Posted by John Cox at 11:38 AM No comments: