I've been looking back at the John Gardner Bond books a lot lately, so I thought it was time to throw a little Raymond Benson into the mix. I'll kick off with his U.S. paperbacks because this one of my favorite sets. I love the uniformity of the design and the location specific backgrounds. These paperbacks were released by Jove, who after a one book break with Cold Fall, returned to their "James Bond in" series design (with the lightning bolt underline) with Benson. 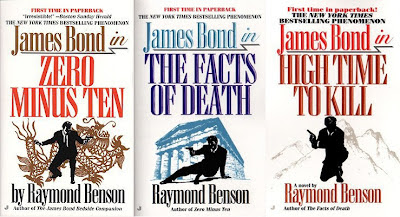 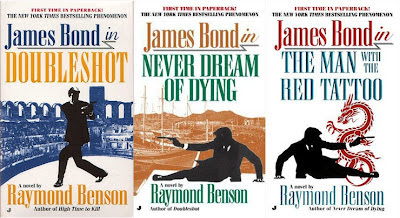 Of course, Raymond Benson also produced three novelizations during his run as continuation novelist. Those paperbacks, released by Triangle, can be see below. 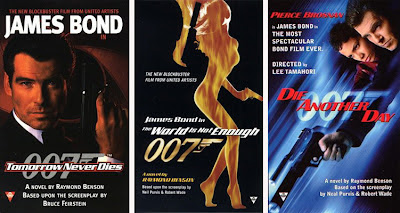 And as long on we're on the subject of Benson U.S. paperbacks, here's a bonus. Below are three prototype covers for Tomorrow Never Dies (using the Cold Fall series art), Zero Minus Ten, and Die Another Day. One thing I like about the DAD cover is that it uses a tagline that was never used for the film: "He's never been cooler." (Taglines pretty much vanished from Bond film marketing after GoldenEye.) And while books with these covers were never actually produced, you'll still see this artwork on listings at Amazon.com, etc. 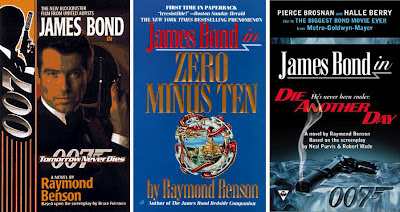