A hardcover collected edition of Dynamite's James Bond VARGR graphic novel will be released on June 21, 2016 and can be pre-ordered now on Amazon.

The six part series is written by Warren Ellis with art by Jason Masters and Dom Reardon. The storyline, which finds Bond in action in Helsinki and Berlin, is currently playing out in individual issues with #4 due out on Wednesday.

Cover art for this collected edition has not yet been released.

Pre-order the collected VARGR at Amazon.com (U.S.) and Amazon.co.uk (UK).

With thanks to Tanner at Double O Section.
Posted by John Cox at 11:14 AM No comments:

Stephan Bäckman reports on his excellent James Bond blog that an original painting of Tatiana Romanova by Richard Harvey sold at auction today for $594. Here's the image and description from the Swann auction website. 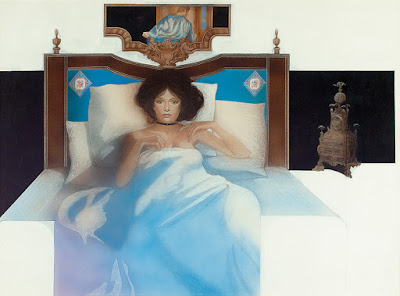 "Tatiana." Chalk and airbrush on paper showing a voluptuous woman lounging in bed, as James Bond, seen reflected in the mirror above the headboard, dons his robe. 394x559 mm; 15 1/2x22 inches, sight size. Unsigned but with publisher's label on verso. Illustration for "From Russia with Love" by Ian Fleming, published by The Reader's Digest in the 1980s; chosen and exhibited at The Society of Illustrators. Archivally matted and framed.

Email ThisBlogThis!Share to TwitterShare to FacebookShare to Pinterest
Tags: Auctions, From Russia With Love, Ian Fleming 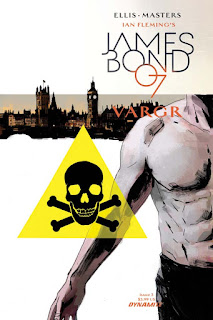 Dynamite's James Bond VARGR #3 is released today. This is the third installment in a six part graphic novel series by Warren Ellis and Jason Masters.

Bond is on his way to break up a small, agile drug-trafficking operation in Berlin. The truth about what he's walking into is bigger, scarier and much more lethal. Berlin is about to catch fire, and James Bond is trapped inside. Dynamite Entertainment proudly continues the "VARGR" storyline, the debut chapter of the ongoing James Bond saga as written by industry legend Warren Ellis and illustrated by Jason Masters!


You can purchase VARGR #3 and see variant covers and sample pages at the Dynamite website. Issue #4 is due out February 3.
Posted by John Cox at 6:34 AM 2 comments: