Bond is back in 'The Girl Machine'

CommanderBond.net reports that Titan's newest collection of classic James Bond comic strips, The Girl Machine (I love this title) has been released in the UK.

First serialized in 1973, "The Girl Machine" finds 007 and Bond Girl Zebeide Rashid traveling to Hajar to free an imprisoned Emir. In the second story, "Beware of Butterflies" Bond is once again teamed with agent Suzi Kew to influtrae an Eastern European spy ring. The final story in the collection, "The Nevsky Nude", finds 007 uncovering a SMERSH operation in Sussex.

Story info from The Bond Files by Andy Lane and Paul Simpson.
Posted by The Book Bond at 11:10 AM No comments:

Trailer for 'The Enemy'

A trailer for Young Bond author Charlie Higson's new non-Bond horror novel The Enemy has been posted on the official Enemy website. Looks fun. And scary!


UPDATE: I've replaced the teaser with the full UNCUT version.
Posted by The Book Bond at 9:55 AM No comments: 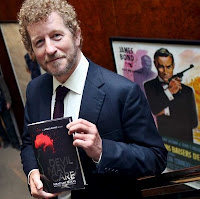 The official Ian Fleming Publications website has sorted out their technical problems and you can now order their limited editions Thrilling Cities and The Diamond Smugglers from the online store.

Posted by The Book Bond at 9:00 AM No comments:

Take a listen to these two terrific interviews with James Bond author John Gardner from 1984 and 1985. Intriguingly, Gardner says the title of his sixth Bond book will be Tomorrow Always Comes. A good Bondian title. How that became the abysmal No Deals, Mr. Bond is beyond me. Enjoy.
Wired for Books: Dow Swaim interviews John Gardner
Posted by The Book Bond at 9:23 AM 2 comments:

Check out this awesome subway poster for the UK paperback edition of Devil May Care by Sebastian Faulks. 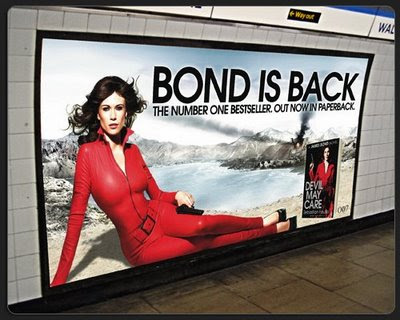 The ad campaign in the UK was handled by Kennedy Monk, a graphic design studio creating original design of all types specializing in advertising design for the entertainment industry. According to the K+M website:

"Kennedy Monk were delighted to be commissioned by Penguin Books to design outdoor advertising for the paperback release of the latest Bond novel, Sebastian Faulks writing as Ian Fleming's Devil May Care.

Penguin were looking for a campaign that would deliver the requisite glamour and thrills that are hallmarks of the Bond movie franchise. Devil May Care was Penguin's fastest selling hardback ever, and great things are expected of the paperback, which won the prize for popular fiction at the Galaxy British Book Awards in April 2009."