Our friends at Coleman Getty (the PR machine behind Young Bond) have provided us with the first high-res image of the finalized Hurricane Gold cover art. 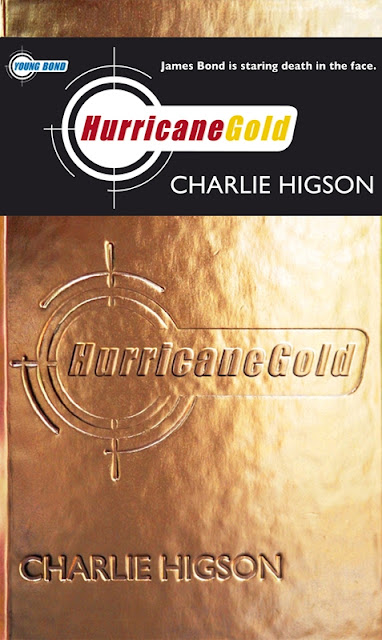 The Hurricane Gold cover was first seen the hands of author Charlie Higson in a photo that accompanied the press release announcing the book’s September 6, 2007 release. The above art differs in a few key regards. First, the name of Charlie Higson is now embossed on the cover below the title. Also, the wrap-around banner is completely revamped, now showing the book title inside the familiar Young Bond logo and omitting the silhouette of the crocodile (presumably the “creature encounter” of this book).

Hurricane Gold sees young Bond battling gangsters in the jungles of Mexico. It is the fourth book in the bestselling Young Bond series.
Posted by John Cox at 8:31 AM No comments:

Titan Books has confirmed for The Young Bond Dossier that their next collection of classic James Bond comic strips, Shark Bait, will contain the stories "Shark Bait," "Doomcrack" and "The Xanadu Connection." The collection will also feature part 2 of an article about James Bond’s adventures in U.S. comics.

In "Shark Bait," 007 teams with a female KGB agent to thwart a renegade Royal Navy plot. The story appeared in the Scandinavian magazine James Bond Agent 007 in 1992. This will be its first appearance in English.

"Doomcrack" finds Bond battling SPECTRE who threaten world monuments with a powerful new weapon. "Doomcrack" appeared in the Daily Star from February 1981, and is unique in it’s the only story illustrated by artist Harry North (who also illustrated the Moonraker parody, Moneyraker, for MAD Magazine #213).

Bond travels to Mongolia in "The Xanadu Connection" and tangles with a local villain named Kubla Khan. The story appeared in the Norwegian comic 007 Agent James Bond in 1984.

Titan’s Shark Bait collection is now available for pre-order at Amazon.com and Amazon.co.uk. The release date is February 12, 2008.

Thanks to Zarah Harrison. Story info from The Bond Files by Andy Lane and Paul Simpson and Just Johnnie’s James Bond Comics website.
Posted by The Book Bond at 10:36 AM No comments: 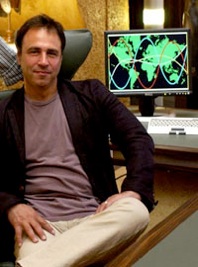 A member of the official Anthony Horowitz messageboard claims the Alex Rider author was originally offered the Young Bond series by Ian Fleming Publications, but turned it down.

“Anthony told me when I met him last year,” says a member by the name of Tyler. “I had mentioned to him the Young Bond series and he gave up the information about how it was brought to him first and he passed on it. He does think Charlie Higson is a good writer, Anthony was in no way rude or bashing the Young Bond series. It just wasn't for him.”


I haven’t read the Alex Rider novels myself, but I did see the recent film version of Stormbreker. While I confess I enjoyed the film (particularly the young actor playing Rider), I do think the film and the world of Alex Rider is pure James Bond pastiche.

Had Horowitz brought this same sensibility to Young Bond, we could have gotten the dreaded “James Bond Jr. redux” that fans originally feared, instead of the highly literate and original series Charlie Higson delivered.

The next Alex Rider novel, Snakehead, is due out in November.
Posted by John Cox at 8:27 AM No comments:

Child explains why he passed on Bond

In April of last year a representative for author Lee Child informed me (via The Young Bond Dossier) that he was not the 2008 Centenary novelist. Now K1Bond007.com has uncovered an interview in which Child himself talks about his close call with Bond fame and explains exactly why he passed...twice!

“Twice over the period of five years they’ve asked me to write the series, no regrets really because I think it is a thankless task in terms of first financial remuneration, as the terms were more favourable to the Ian Fleming estate than to me, and secondly there is the technical and cultural aspect. I see this as an impossible job as it’s now 2007, around 50 years on from the world that James Bond first appeared in. The world has changed, and one of the reasons the world has changed is because of James Bond, this country has altered its cultural frame of reference because of things like James Bond, so any follow-up fifty years later would be somewhat self-referential, and reading the book would be like watching an ABBA tribute band – i.e. what’s the point?”

ABBA tribute band? Well!
Posted by The Book Bond at 2:56 PM No comments: