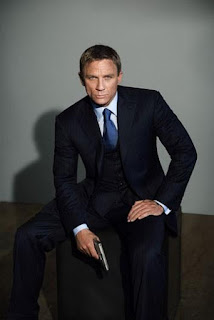 According to a tweet by CNN reporter Andrea Mineo, the next James Bond movie has a title, but star Daniel Craig isn't saying what that title is.

Will it be one of these remaining Fleming titles: The Hilderbrand Rarity, The Property of Lady, 007 in New York or my personal favorite, Risico? Or might the filmmakers opt for a chapter title or even a rejected Fleming title? They have considered going the route in the past. I have it on good authority that Death Leaves an Echo (a working title for For Your Eyes Only) was at one time considered for the Bond 22, which ultimately became Quantum of Solace.

The reason I'm so excited to learn what type of title they will use is this could be an indicator as to whether we'll get a novelization of the 23rd James Bond film. This is The Book Bond after all! As a general rule, IFP issues tie-in reprints when the filmmakers use a Fleming title (Casino Royale) but have created novelizations when they use an original title (Die Another Day).

Come on original title!
Posted by John Cox at 8:49 AM