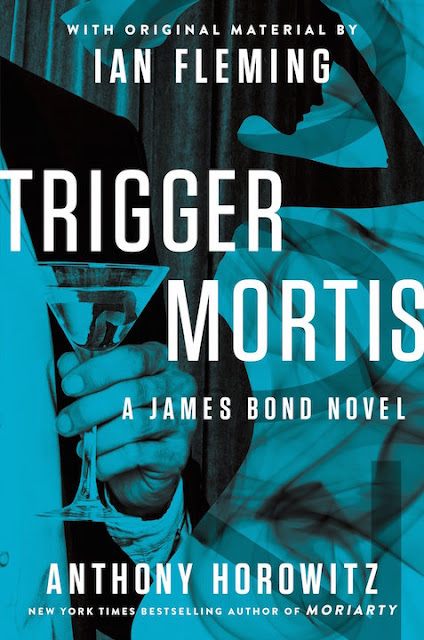 Thanks to Chris Wright for this find.
Posted by John Cox at 9:31 PM 4 comments:

The cover and title for Anthony Horowitz's new James Bond novel is here! On September 8, 2015, James Bond (and Pussy Galore!) will be back in TRIGGER MORTIS.

JAMES BOND RACES AGAINST A COUNTDOWN TO TERROR IN
TRIGGER MORTIS
Anthony Horowitz lifts lid on title of new 007 novel and announces “Pussy Galore is back!” 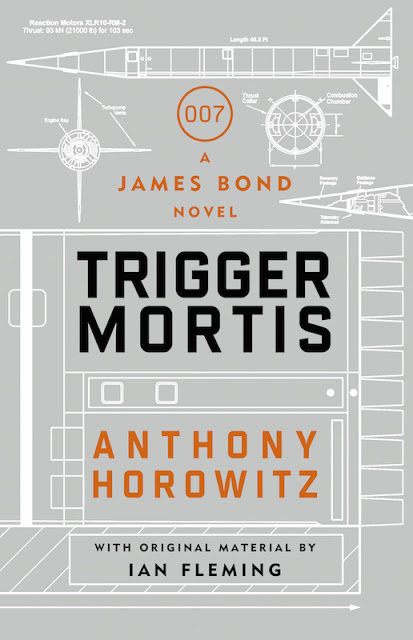 Anthony Horowitz reveals today (28th May), on what would have been James Bond creator Ian Fleming’s 107th birthday, that his forthcoming official 007 adventure is to be titled Trigger Mortis. In a move that will whet the appetite of fans worldwide and is unprecedented among recent Bond novels – the contents have always been shrouded in mystery until publication – Horowitz divulges that the secret agent’s new adventure begins in 1957, two weeks after the events of Fleming’s Goldfinger. Horowitz places Bond in the middle of the Soviet-American Space Race as the United States prepares for a critical rocket launch, and brings back the most famous Bond Girl of all: Pussy Galore!

Horowitz is the latest contemporary novelist to tackle literature’s greatest action hero, and the first to place his work directly within Fleming’s original canon. As well as Pussy Galore, the book features: brand new Bond Girl Jeopardy Lane; Jai Seung Sin, a sadistic, scheming Korean adversary hell-bent on vengeance; and breathless, globe-trotting adventure. Uniquely among latter-day Bond authors, Horowitz has included original Ian Fleming material: a treatment for Murder on Wheels, an episode of a television series that was never made. Fleming’s text sees Bond in the high-octane world of motor racing and it is his never-used plot that kicks off the action of Trigger Mortis.

Anthony Horowitz said: “It was always my intention to go back to the true Bond, which is to say, the Bond that Fleming created and it was a fantastic bonus having some original, unseen material from the master to launch my story. I was so glad that I was allowed to set the book two weeks after my favourite Bond novel, Goldfinger, and I'm delighted that Pussy Galore is back! It was great fun revisiting the most famous Bond Girl of all - although she is by no means the only dangerous lady in Trigger Mortis. I hope fans enjoy it. My aim was to make this the most authentic James Bond novel anyone could have written.

Trigger Mortis will be published on 8th September by Orion Publishing.

Anthony Horowitz has tweeted the following along with a pic of himself holding a proof edition of his new James Bond novel. It appears news will break in exactly 24 hours at 12 midnight GMT. 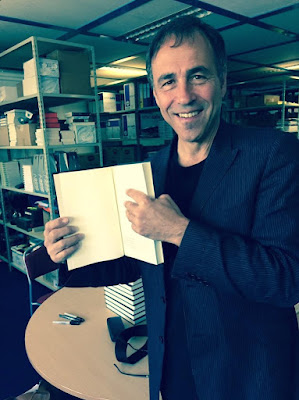 Tomorrow I will be traveling so I might not be able to get the news up as quickly as normal, so keep an eye on Anthony's twitter @AnthonyHorowitz and the official Ian Fleming website: www.ianfleming.com.
Posted by John Cox at 4:00 PM 1 comment:

On May 28th "all will be revealed"

It looks like the big "Project One" news will be coming this Thursday, May 28, which also happens to be Ian Fleming's birthday (I'm guessing that isn't a coincidence). 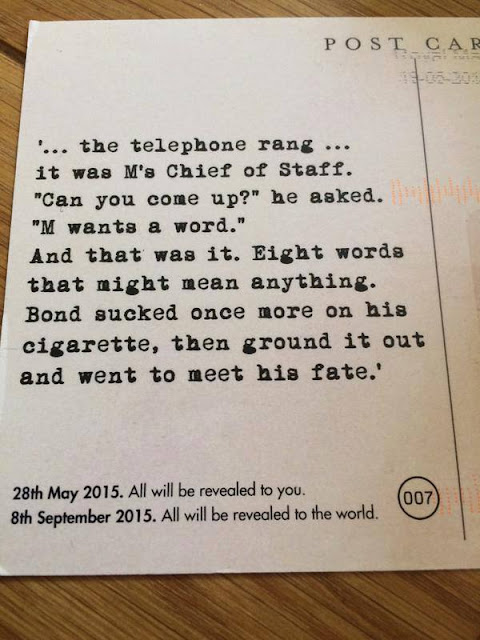 Thanks to Jay Tee for sharing this image on The Book Bond Facebook page.

UPDATE: I just received one of these teaser postcards myself. Check out the front. Love it. 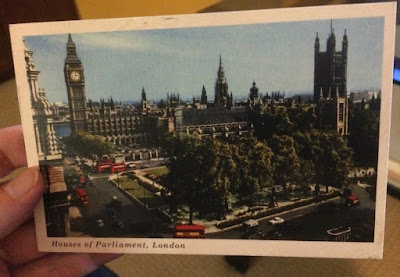 STEVE COLE at the Hay Festival, May 27

Young Bond author Steve Cole will be appearing at the Hay Festival this Wednesday, May 27 at 10am. Details below. You can buy tickets at the festival website HERE. 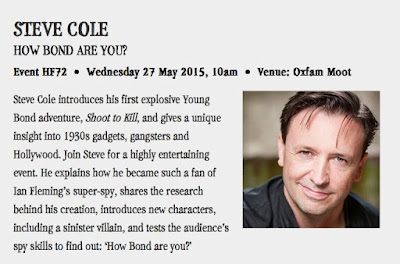 Meanwhile, Steve has revealed on his Steve's Space blog some "exclusive" details about his next Young Bond adventure. Says Steve:

But that’s for your eyes only!"


Call me crazy, but I'm actually intrigued by the mention of "timber." Hmmm...
Posted by John Cox at 7:48 AM No comments:

Cover art for the UK paperback edition of Steve Cole's first Young Bond novel, Shoot To Kill, has been revealed on the official Young Bond Facebook page. The paperback is slated for release on October 22, 2015 and can be pre-ordered on Amazon.co.uk. 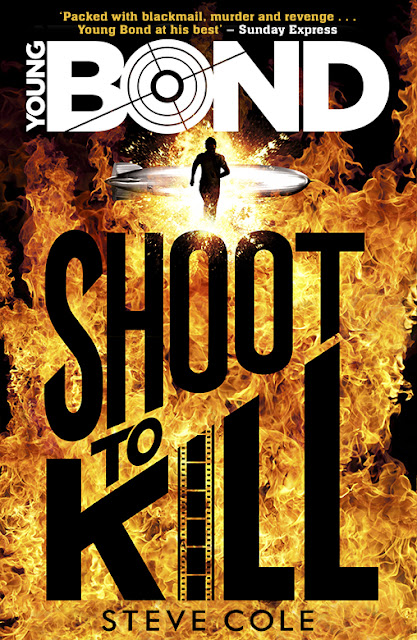 Shoot To Kill was released in hardcover in the UK by Random House Children's on November 6, 2014. No word yet on when Steve Cole's next Young Bond novel (the 007th in the full series) will be published.
Posted by John Cox at 8:45 AM No comments:

When Bond went LIVE AT FIVE

Check out this artwork for Raymond Benson's short story Live At Five. The story appeared in TV Guide in November 1999 as part of a special issue showcasing The World Is Not Enough (recall that Raymond wrote the novelization for that film). I love how it evokes the classic Signet series artwork with Fleming's name running down the edge. 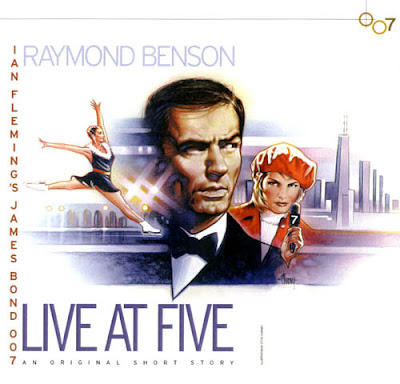 Live At Five is a unique Bond short story in that it's a "flashback" adventure set in the year 1985 (a year without a Gardner novel, which may or may not have been intentional on Raymond's part). In it, Bond travels to Chicago to help a Russian ice-skater defect with the help of a television news reporter, Janet Davis. In my CBn Interview with Raymond, he recalled:

"The idea for the plot had to do with a Russian defector, an ice skater. In order for that to make any sense, the story had to take place prior to 1989, before the fall of the Soviet Union. Simple as that. So I framed the bulk of the story within the context of Bond remembering the events of that time prior to meeting the girl again in the present. The story has a nice twist, I think, when the identity of the girl is revealed."


Live At Five was included in the 2011 anthology collection of Raymond's Bond work, Choice of Weapons.
Posted by John Cox at 7:37 AM No comments:

The entire Young Bond series is getting a cover refresh in Germany on July 1, 2015. Arena will re-release all five Charlie Higson Young Bond novels with these cool new cover designs. You'll noticed that they all sport the new Young Bond logo. Also note that, in Germany, Double or Die is titled GoldenBoy.


Steve Cole's new Young Bond novel, Shoot to Kill, will be released in Germany on October 22, 2015 by KJB. Below is the cover art. Translation is by Leo H. Strohm.

Thanks to Trempo for the tip.
Posted by John Cox at 1:52 PM 1 comment:

Recently a mysterious listing appeared on Amazon.co.uk for "Young Bond: Hellstriker." At first it appeared this might be the title of Young Bond 7. Recall that Amazon leaked the title of Hurricane Gold. But I've been told by the powers-that-be that Hellstriker is not the title of Steve Cole's next Young Bond novel. I expect the listing will be revised or removed, so I snatched an image for posterity.

Now, this could be a legit working title. There is precedent for this. Raymond Benson's High Time To Kill first appeared on Amazon under the author's original title, A Better Way To Die, so...

The release date of November 1, 2015 might also be erroneous. While I'd love a new Young Bond book in November, it's looking more likely that Steve's next will appear in 2016.

If you're a fan of working and rejected titles (as am I), check out: A Bond by any other name.
Posted by John Cox at 11:07 AM 3 comments:

Anthony Horowitz on May "PROJECT ONE" news

We know we will be getting some "Project One" news this month. When asked specifically about the date, author Anthony Horowitz tweeted the following: 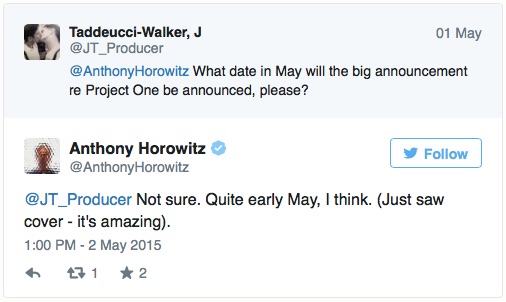 In the past IFP has used Ian Fleming's birthday, May 28, to announce major news and reveal book covers, etc. But here's hoping Anthony is correct and the news will come in early May instead. I'm itching for some fresh book Bond news!

"Project One" (codename) is set in the 1950s and will be based in part on unpublished Ian Fleming material. The book will be released on September 8, 2015 in both the U.S. and UK.
Posted by John Cox at 10:51 AM No comments: