EXCLUSIVE: The inside story of the two DR. NO covers 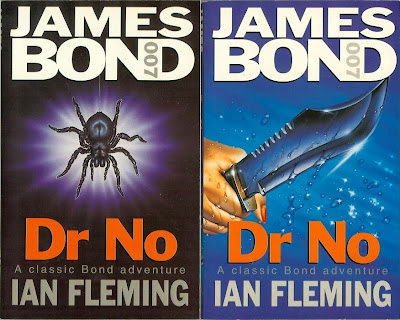 Recently I was thrilled to get an email from Stewart Larking, the man who designed the UK cover art for the Ian Fleming reprints and John Gardner titles in the 1990s. Larking took over the Bond series from Art Director Ian Hughes after his idea of using the hardcover artwork on the Never Send Flowers paperback was rejected. Stewart was then asked to revamp the entire backlist, so he bought in artists David Scutt and Larry Rostant to work on the new cover designs. I covered the spectacular results of their work HERE -- which is how Stewart discovered this blog.

In our correspondence, Stewart was able to clear up one of the great mysteries of this series; why there are two covers for Ian Fleming's Dr. No. Stewart explains:

"As for the the Dr No cover, this was originally the spider artwork. The idea and the rough had been approved at the cover meeting. The final artwork was supplied by David, and we proofed up the cover. Then the sales director (Amanda, later to be MD of Headline) decided she did not like the spider. This was a last minute thing, and we then had to get another artist to produce the knife illustration as David was busy working on other illustrations. The knife artwork came in and we again proofed up a cover. But! The James bond trust and a few of the sales reps took against it and we then put the spider back on the book. I must admit I prefer the spider myself."

As to the knife art mysteriously appearing on the 9th edition of Dr. No:

"I think that could of been a reprint muck up. The files were proofed and approved, both covers. It was only a last minute save for the spider art after Amanda going 'Yuck! I hate spiders!' The cover film (yes it was back in the good old days) would of been held at a printer. When a reprint was put out to that printer they must of used the wrong film. So really a clerical error caused the one off."

Thank you Stewart Larking for getting in touch and for sharing with us the inside story of the dueling Doctors!
Posted by John Cox at 8:16 AM