WITH A MIND TO KILL U.S. cover looks familiar 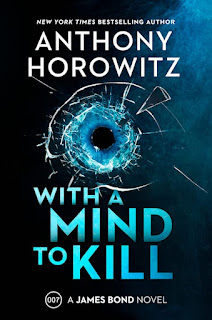 Cover art for the U.S. hardcover edition of Anthony Horowitz's With A Mind To Kill has appeared on Amazon and publisher Harper Collins' website...and it looks familiar!

As you can see, the artwork is the same as the UK hardcover from Jonathan Cape. The only difference I can spot is the U.S. edition touts Horowitz as the "New York Times Bestselling Author" while the UK edition reads "The Number One Bestseller".

If this holds, it will be a little disappointing that we don't get alternative U.S. cover art as that's part of the fun of collecting multiple editions. But it is nice cover art. And this isn't a first. From Russia With Love, Goldfinger, For Your Eyes Only, The Spy Who Loved Me, Colonel Sun, and SilverFin shared the same cover art on their UK and U.S. editions.

The U.S. edition of With A Mind To Kill will be released on May 24, 2022 and can be pre-ordered on Amazon.com.