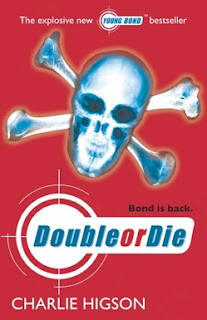 This time out, Higson builds a Young Bond novel on a metaphor. Double or Die is an adventure of the mind – the skull. This is clear from the Flemingesque prologue in which an Eton professor muses on the mind as a “hungry machine” (this might have been a good title). Higson plays this motif throughout. References to the mind and skulls abound. The henchman has an oversized skull-like head; Bond examines pickled brains at the Royal College of Surgeons; and the object at the end of Bond’s quest also perfectly ties into this theme (but I will not spoil it).

Brainpower also drives the narrative. Bond and his band of friends must decrypt puzzles and crossword clues contained within a mysterious cipher. Bond discovers he has a talent for calculating gambling odds under pressure (gambling -- a ferociously mental activity when done right -- gets terrific play in this novel). Likewise, Bond’s greatest physical struggle in this novel is also a mental one, as he must keep his mind from caving into the effects of severe alcohol posing, a literally gut wrenching sequence that makes one wonder how 007 ever developed a taste for martinis.

Where Blood Fever was bright and expansive, Double or Die is dark and contained, even claustrophobic (just as you would except the inside of a head to be). While this may make it a lesser Bondian adventure for some, the smaller canvas allows Higson to work in greater texture and detail, making Double or Die the most vivid and visual of all the Young Bond novels to date. Higson’s screenwriting skills are in full bloom here. Bond’s discovery of a dead professor in Cambridge is a powerfully cinematic moment, as is his car chase and the effects of its fiery finale.

With its various London locations -- including an illegal casino and prizefight den called “Paradice” -- Double or Die is the Young Bond novel that showcases its period setting the best. Higson peppers the book with delightful slang and idioms of the period. Long forgotten brand names are resurrected like product placement circa 1933. The book’s timeframe is compressed into an action-packed weekend, which makes it unique among Bond novels (and echoes Fleming’s own third book, Moonraker).

While the body count in Double or Die is lower than Blood Fever, Higson doesn’t skimp on the gore, especially during the terrific climax on the London Docklands and inside an abandon pneumatic railway (wonderful Bondian locations both). The gore will certainly delight the target audience, as well as seasoned Bond fans. The fact that henchmen, Wolfgang, comes away from each encounter with young James missing another body part is grisly good fun.

All the Young Bond novels contain inside references for Fleming fans to discover, and Double or Die is no exception. Noteworthy here is Bond’s use of a familiar alias; his sighting his future London headquarters; a reference to a famous casino; and his first delivery of “Bond, James Bond” across a gaming table. We even hear Bond called “Young Sherlock Holmes” at one point, which may or may not be a nod to the 1985 movie that gave us a pint-sized version of THAT classic English literary hero. Double or Die also contains a postscript unlike anything that has yet appeared in a Young Bond novel. I will leave it to the reader to decide whether it belongs in the Young Bond universe (I’m somewhat unsure myself).

Absence of a Bond Girl (or any female for that matter) is missed during the first two thirds of the book, but the arrival of the perfectly named Kelly Kelly and her “Monstrous Regiment” (a sort of cockney street urchin version of Pussy Galore's Flying Circus) is a highlight of the final third. Higson again toys with romance, but he’s mindful about offending the prepubescent sensibilities of his youngest male readers. At the risk of getting a schoolyard beating, I admit that I’m looking forward to the “love story” Higson promises will feature in his fifth Young Bond novel, By Royal Command.

As a villain, Sir John Charnage is not quite in the same league as Higson’s past creations, although his fetish for collecting poisons is pure Bond. But Higson may be underplaying Charnage in order to set up a larger villain for a future book (there is a nice climatic twist in this regard). Plot-wise, Bond’s motivations and justifications for not going to the police might not hold up under intense scrutiny -- but why scrutinize James Bond? These are adventures for the Right brain, not the Left. (Ah, there we are back talking about the brain.)

The measure of any James Bond continuation novel, and novelist, is how they compare to Ian Fleming. Charlie Higson matched Fleming with his second Young Bond novel Blood Fever. Now, with the complex and thrilling Double or Die, Higson appears to be steering the Young Bond series toward even loftier literary achievement.
Posted by John Cox at 12:49 PM