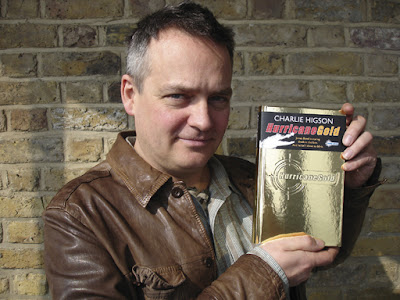 Press Release
Puffin and Ian Fleming Publications announce that Hurricane Gold is the title of the new book in Charlie Higson’s bestselling Young Bond series, to be published on 6th September 2007.

For the first time in the history of the series, Hurricane Gold will be published in hardback, priced £12.99. The eagerly awaited next installment will be a special treat for Young Bond fans. In keeping with the theme of the title, it will have a gold cover with luxury debossed lettering and gilt-edged pages.

Hurricane Gold, the fourth adventure in a planned series of five, is set in Mexico and on an island off the Mexican coast. A safe haven for criminals, the only way off the island is through the deadly Avenida de la Muerte. It is on this island that James finds himself trapped, among some of the world’s most evil criminals.

The Young Bond books have to date sold over half a million copies combined. The series was launched with SilverFin in March 2005 and was followed by Blood Fever in January 2006 and Double or Die, published in January this year.