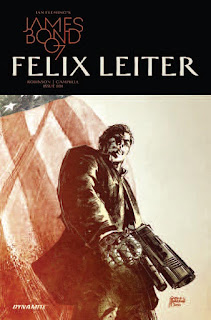 "Felix Leiter is a fantastically interesting character," says writer James Robinson in a statement. "He combines the best elements of the James Bond universe with the dark alleys and darker deeds of crime fiction. A private detective, done with a life of spying, who is constantly dragged back into that world, like it or not. I'm excited for readers to see the tale of intrigue and big action that I've dreamed up for Felix."

"I've been a lifelong fan of James' writing and it's beyond a thrill to be working with him on not one, but two comic book projects this year," says Joseph Rybandt, Executive Editor at Dynamite. "The expansion of the 007 comic book world this time out focuses on his American counter-part, Felix Leiter, and sends him into Japan. It's a trip all Bond fans are going to want to take this January!"

Felix Leiter appeared in Ian Fleming’s Casino Royale, Live and Let Die, Diamonds Are Forever, Goldfinger, Thunderball, and The Man with the Golden Gun. In Live and Let Die, Felix is the victim of a shark attack in which he loses part of his right arm and left leg, sporting prosthetic limbs during his subsequent appearances. In this new miniseries, we meet Leiter post-injuries and working independently from the CIA at his own detective agency.