Huge news today! IFP has announced that Anthony Horowitz will return to pen a second James Bond novel to be published in 2018. Here's the full press release from The Bookseller. 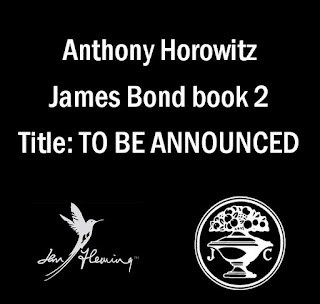 Horowitz was invited to write a second official James Bond novel by Ian Fleming Publications Ltd after the success of his 2015 bestseller, Trigger Mortis, published by Orion in September last year.

The news Jonathan Cape will publish the new Bond book follows swiftly on the heels of news Horowitz is writing a new series of 'whodunnit’ crime novels for Century and Arrow.

As yet untitled, the setting will be "period Bond" and the story will again feature previously unpublished material by Fleming.

UK and Commonwealth rights were acquired for Cape by Richard Cable, m.d. of Vintage, and Michal Shavit, publishing director at Jonathan Cape, to publish in spring 2018. Rights were sold in the English language by Jonny Geller of Curtis Brown, on behalf of Ian Fleming Publications Ltd and The Ian Fleming Estate.

Cable said: "We are delighted to welcome Anthony Horowitz and a new James Bond novel to Jonathan Cape, Ian Fleming’s publisher. Anthony’s first Bond novel, Trigger Mortis, was a great critical and commercial success, and we know that there are thousands of Bond fans who will be thrilled that Anthony has taken on the challenge once again."

Horowitz said: "Writing Trigger Mortis was a pleasure and I was delighted by the positive response when it was published. And I was thrilled when the Ian Fleming estate asked me to come back. How could I refuse? I can't wait to return to the world of James Bond."

Horowitz is the fourth author in recent years to be invited by Ian Fleming Publications Ltd to write an official Bond novel, following in the footsteps of William Boyd, whose Solo was published in 2013, the American thriller writer Jeffery Deaver, who wrote Carte Blanche in 2011, and Sebastian Faulks, whose Devil May Care was published to mark Ian Fleming’s centenary in 2008.

Horowitz has written over 40 books including the teen spy series Alex Rider, which is estimated to have sold 19m copies worldwide and was adapted into the movie "Stormbreaker" in 2006. He is also a writer for adults and was commissioned by the Conan Doyle Estate and Orion Books to write a new Sherlock Holmes novel. The House of Silk was published in November 2011, selling more than 35 countries around the world. He is also behind television series including "Midsomer Murders" and "Foyle's War".

Corinne Turner, m.d. of Ian Fleming Publications Ltd, said: "We are absolutely thrilled that Anthony Horowitz is going to write a second James Bond novel with inspiration again from original Fleming material, and of course delighted that Bond will be back home at Jonathan Cape. Trigger Mortis was a superb book, full of energy, wit, twists and turns, and we can’t wait to see what Anthony comes up with next."

Horowitz last night (3rd October) launched Magpie Murders, a standalone crime novel inspired by Agatha Christie and the golden age of crime fiction, which publishes on Thursday (6th October). In the spirit of the night, attendees were asked to solve a riddle to find the venue, the 1901 Art Club, where an intimate gathering took place.

In addition to Trigger Mortis, Orion has also published a set of Sherlock Holmes novels by Horowitz, including The House of Silk.


Thanks to Double O Section for first alerting me to the news.
Posted by John Cox at 7:39 AM