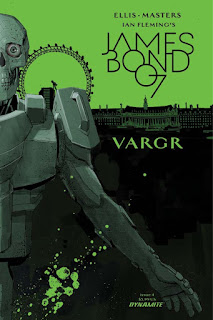 Dynamite's James Bond VARGR #4 is released today.* This is the fourth installment in a six part graphic novel series by Warren Ellis and Jason Masters.

James Bond is alone in Berlin, with nothing but the clothes on his back and the gun in his hand. When help is offered from an unexpected source, Bond has no choice but to accept it - even though it may guarantee that he doesn't live through the night. Dynamite Entertainment proudly continues the first James Bond comic book series in over 20 years! "Ian Fleming's James Bond is an icon, and it's a delight to tell visual narratives with the original, brutal, damaged Bond of the books." - Warren Ellis


You can purchase VARGR #4 at the Dynamite website. Issue #5 is due out on March 2.

*UPDATE: It appears the release is delayed until next week, Feb 10. Thanks to Viper007.
Posted by John Cox at 7:52 AM