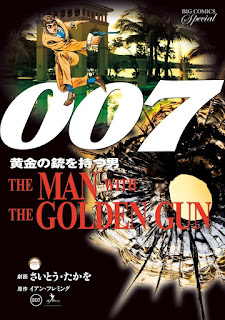 In 1964 the famous Japanese artist Takao Saito produced four loose adaptations of the Ian Fleming novels Thunderball, The Man With The Golden Gun, On Her Majesty's Secret Service, and Live And Let Die. The stories were serialized in a monthly comic book and then later collected. Even though they were officially licensed, Glidrose put a stop to the series in 1967.

After remaining out of print for many years, these adaptations are once again available in four collected editions from Big Comics. Tanner over at at the excellent spy blog Double O Section, who broke this news, has all four in hand and has posted a terrific overview and review here:

The new James Bond Japanese comic reprints can be purchased from Amazon.jp.
Posted by John Cox at 11:48 AM