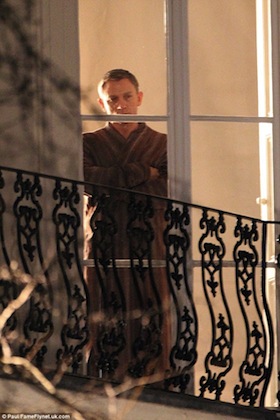 BBC News has posted an audio clip from an interview with Daniel Craig getting his reactions to the unused Ian Fleming James Bond titles. When asked if he would star in a film with the following titles, Craig responded:

The Hildebrand Rarity - "Yeah, but that one came up a few years ago, I think that did, and they've not thought about naming a film after that. Yeah, maybe alright."

The Property of a Lady - "Ohhh... Sounds a bit like sort of a ladies magazine. I'm not sure that's a [interviewer interrupts before Craig can finish]."

007 in New York - "Is that a short story? Not the most exciting title I've ever heard."

Craig is currently shooting the new Bond film SPECTRE in central London. Photos from the shoot by the Daily Mail (above) have given rise to speculation that Bond's flat will be seen in the new film. If so, this will be the first appearance of Bond's home since Live and Let Die in 1973, and only the third time it's been seen on film.

Thanks to my friends at CommanderBond.net for this tip.
Posted by John Cox at 11:20 AM