The Making of THE LIVING DAYLIGHTS 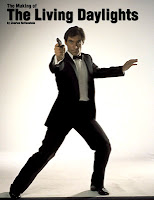 Here's news that both excellent and frustrating. Charles Helfenstein, who wrote the superb The Making of On Her Majesty's Secret Service, has now written the definitive book on The Making of The Living Daylights, Timothy Dalton's 1987 debut James Bond film based loosely on the Ian Fleming short story of the same name.

The frustrating part is that the book was released back on October 5 and is currently out of stock on Amazon. Not only did I not know this book came out, but I didn't even know Charles was working on it!

I don't have the book in hand to give an opinion of it, but if Charles' OHMSS book is any indicator, then this book will be excellent.

Hopefully its unavailability on Amazon is only temporary.

UPDATE: A quick update from the author himself. The book was copyrighted Oct 5, but only released recently, so this wasn't missed for as long as I thought. Also, the book is readily available from BN.com.

UPDATE 2: My book arrived today and I've had a quick flip through it and...OMG!...this is a masterwork. If you have to forgo all the other 50th Anniversary whatnot to get this book, DO IT! You have been advised.
Posted by John Cox at 4:57 PM