No SKYFALL for Boyd 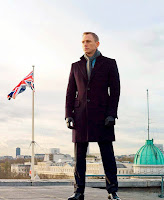 There's been a sudden flurry of press about the new James Bond novel due next year, with The Telegraph and the Mail Online emphasizing author William Boyd's comment about Bond being a "massive boozer" in the books and early films (it's true).

The Independent takes a different approach, building their report on the fact that the book is set back in 1969 ("James Bond will be thrust into a world of Woodstock, Vietnam protests and man's first steps on the Moon.")

But all the reports include a mention of how Boyd has purposely avoided seeing the new mega-hit James Bond film, Skyfall, although none explain exactly why. Presumably Boyd doesn't want to be influenced by the Film Bond? Fair enough. But The Independent also has this:

An expert in Bond’s life and times, Boyd corrects an error in the climax of Sam Mendes’ film, which sought to return OO7 to his childhood home, the Skyfall Lodge in Glencoe, Scotland. “Bond was brought up by an aunt in somewhere like Wiltshire,” Boyd said.


Boyd isn't entirely right about this. Bond's time at Skyfall Lodge precedes his going to live with his aunt. Skyfall was the home of his parents. After their death, he was sent to live with his aunt. Of course, the Skyfall mythology is a completely new invention by the screenwriters, but one of the many things I liked about the new Bond film is how it included Bond's childhood without contradicting Fleming or even Charlie Higson's Young Bond series.

Anyway, here are the articles, all of which appeared today:

William Boyd's Bond novel will be published in Fall of 2013 by Jonathan Cape in the UK and HarperCollins in the U.S and Canada.
Posted by John Cox at 2:50 PM