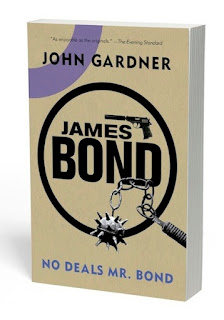 The new U.S. paperback edition of John Gardner's No Deals Mr. Bond from Pegasus has been released early. Originally scheduled for October 15, Amazon shows the book as in stock now.

Scorpius was also announced for October 15. So far that release date is holding. My question/concern is whether Pegasus will actually release all the Gardner books in the U.S. as Orion has done in the UK. So far they've not announced any books beyond Scorpius. Also, Orion's UK editions are now listing on the U.S. Amazon.

Visit our special Gardner Renewed page for links and release date updates for all the Gardner-Bond reprints in the U.S. and UK.

Thanks to Neil Bulk for the alert.

UPDATE: Word is Scorpius is now shipping as well.
Posted by John Cox at 8:26 AM