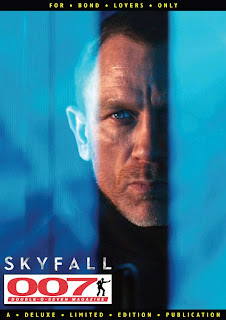 OO7 Magazine, the longest running James Bond fanzine, is out now with issue #55.

As you can see from the cover, the new Bond film SKYFALL is covered in "Will BOND 23 rise or fall?" by Luke Williams. Robert Sellers, author of The Battle for Bond, looks back at "The Search For Bond: How the 007 role was won and lost" in the first of a four part series. Photographer Terry O'Neill is interviewed about his career working with all five James Bond actors and his upcoming book, All About Bond.

Finally, book Bond fans will be interested in “Balloon, mein herr?”, an examination by Luke Williams of the fascinating parallels between the film versions of Graham Greene’s The Third Man (1949) and Ian Fleming’s The Living Daylights (1987).