IAN FLEMING Bond titles to be released in Germany 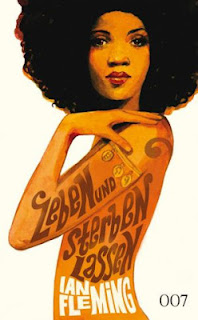 CommanderBond.net, which has recently come roaring back as a major Bond news source, reports that the 14 original Ian Fleming James Bond novels will be reprinted in Germany as a uniform set for the very first time.

The publisher is Cross Cult. Cover art will be the Michael Gillette artwork from the 2008 centenary editions (right).

CBn also points out that these all-new translations will be the first time the Fleming books have appeared in Germany unedited.

Thanks to CBn and Helmut Schierer for sharing this scoop!
Posted by John Cox at 9:12 AM