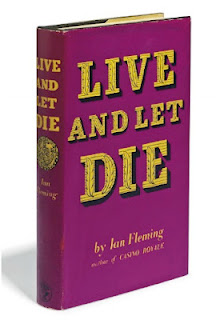 Live and Let Die, was the second novel in Fleming's James Bond series. It was first published in the UK by Jonathan Cape on April 5th, 1954. Copies in good condition are in-demand by collectors.

This particular book was described by Christie's as; "(a) First edition of the second bond novel, in an attractive example of the first issue dust jacket, with the price '10s.6d. Net' and blurb on the front flap, and without any credit for the jacket design."

Live and Let Die had an initial print run of only 7,500 copies, which quickly sold-out after its April release in 1954. Because of the small supply, and the amount of time that has passed (58 years for this particular book), it's very rare to find a first-run copy in excellent condition with the original dust jacket still intact.

Thanks to James Massey for the tip.
Posted by John Cox at 4:49 PM