In early 2007, right on the heels of the release of Double or Die, Bond fans were surprised to learn that the next Young Bond novel would be released in the summer of that same year. Until then, the series had been on a one book per year schedule.

"Actually, what happened was Book Four was not meant to be out until next year," author Charlie Higson explained in 2007. "I had various other writing jobs, so I delivered Book Four early to Puffin, and pushed it through to make sure it was finished well in advance so that I could clear the decks to get on with other writing before I started on Book Five. But, of course, publishers being publishers, they got the book early and said 'Well, we’ll publish it early!' So they brought publication forward by about four or five months, which basically means that I’m four or five months behind on Book Five."

This time Puffin couldn’t keep the title under wraps, which leaked on Amazon a few days before the official announcement on April 24, 2007 of Young Bond 4: Hurricane Gold.

"Well, as with all the other titles, it came very late in the day after many, many different titles," says Higson. "In fact, my working title for the book was Lagrimas Negras, which was very quickly rejected by the publishers as being incomprehensible to English readers. But the publishers had got very excited about the idea of gold and they said 'we'd love to have gold in the title somewhere' because they were working on this concept of making a gold book."

As the book featured Bond struggling amid the ravages of a hurricane, Higson suggested a combination of these two major themes. "It’s quite a nice combination for a title. So I suggested [Hurricane Gold] to them and they jumped at it, at which point, as with SilverFin, I had to go back and work it into the book a bit."

The all-gold hardcover (a first for the series) would also have a wrap around banner with the title. Along with the original press release came a photo of Charlie Higson holding the book. But on this photo we see a banner with the silhouette of a crocodile, which continued the creepy critter themes of the other covers. However, it was soon decided this spoiled a surprise in the book, so the crocodile was eliminated come publication. (Happily, the crocodile would return with a vengeance on the paperback edition.)

Another surprise was the book's location. Higson had previously said that Book 4 would be set in the Alps. But the teaser announced Book 4 would feature "A treacherous road trip in Mexico."

Higson explained the reason for the change. "After Double or Die which was cold, grey England at Christmas, I really thought it was important to send him off somewhere hot and glamorous for the next one. And in fact, that was kind of the reaction Ian Fleming got after Moonraker. He got lots of letters from people saying 'We don’t want to see Bond in Kent. We want to see him somewhere nice and sunny.'"

For his "sunny" locale, Higson was initially torn between Mexico and North Africa. But then he discovered that Ian Fleming dismissed North Africa as a location for Bond.

"I don’t know what his objections were but he didn’t like the idea of North Africa," says Higson. "So I thought well, Mexico. And then I can start in Mexico and end up in the Caribbean. Geographically it makes sense. I thought I really had to have something in the books of the Caribbean because it was such a big deal for Fleming." 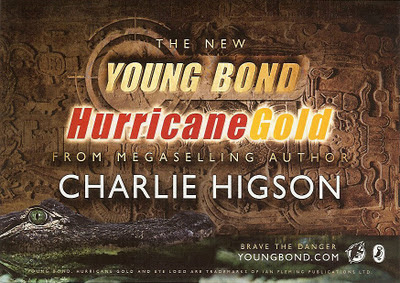 Feeling that the structure of the books were becoming "a little bit obvious that you’d have the first third of the story in Eton, and then he’d go off, out for a big adventure," Higson decided to shake up the formula in his fourth book. In Hurricane Gold there would be no scenes set at Eton. The change allowed Higson to create a faster, more action-packed novel. "I thought, yeah, let’s switch it around a bit and just launch him straight in at the beginning fully into the adventure," says Higson.

Launch he did. Hurricane Gold has a relentless pace and some truly spectacular set pieces. The book finds Bond on vacation with his Aunt Charmain in Mexico, where he quickly becomes involved with a gang of brutal American gangsters led by the villainous, Mrs. Glass. 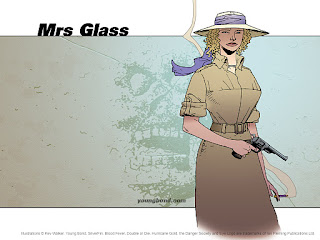 A female villain is a rarity in a Bond novel, and, in fact, the character started out as male. But Higson decided a woman worked better and made the change. "Not during the book," he quipped. "Although perhaps he should. It’s about time we had a sex-changing Bond villain."

Another one of Higson's most colorful characters in the book is the brain damaged henchman, "Manny the Girl." In the novel it's explained that Manny received his nicknamed because his M.O. of robbing banks dressed as a woman. But in reality the name is rooted in Fleming. Higson discovered the name in an unpublished Ian Fleming notebook, among other unused gems like Betty Freshette, Pearl Dazzle, Pelikan Strat, and Doctor Thong.

The Bond Girl also sports one of the more Bondian names of the series, Precious Stone. "Actually in the first draft of the book she wasn’t called Precious, she was called Amaryllis Stone," says Higson. "I like the name Amaryllis and, obviously, there was a Fleming connection. A cousin, I think she was a cello player, who is alluded to in From A View To A Kill rather cheekily by Fleming."

However, because the character starts off as somewhat unpleasant and spoiled, IFP were a worried that it might upset the Fleming family, so Higson went searching for another name and decided Precious worked just as well.

"It’s quite good for the character, this kind of southern belle who lives with her father who absolutely dotes on, and so he's called her 'Precious' and she's lived up to her name." (Higson would later use Amaryllis as the name of yacht in his Young Bond short story, A Hard Man To Kill.)

Another nod to Fleming came in the form of the books climatic "Avenue of Death", an endurance test that recalled Doctor No's climatic maze of death. Says Higson, "To a certain extent the whole book is structured like that when James starts off, and he’s got to work his way through these series of disasters and problems, and eventually he arrives at the island and then he has to do the whole thing again in miniature in the Avenue Of Death."


After the success of Double or Die’s "name the book" promotion, the publishers decided to go all out for Hurricane Gold. The book itself would be solid gold in color, even down to the page edges. A selection of 1500 copies would be signed and numbered by Charlie Higson and distributed to independent bookstores with the promise that somewhere in the batch would be the desirable "007" edition. (It was ultimately discovered in a small bookshop in Lytham St Ann's in Lancashire, and sold on eBay for a tidy £156.50...to me.)

Furthermore, the publisher commissioned "jeweler to the stars" Theo Fennell to create a 24-caret solid gold copy of the book, which opened up to reveal an inner compartment with an inlay of ebonized wood containing a secret message from Charlie Higson. This special Gold Book would be displayed at the Ian Fleming Centenary exhibition at the National War Museum in 2008.

The Hurricane Gold launch event would even out shine the Double or Die launch. Once again Waterston's Piccadilly would host the event dubbed "Gold Thursday." For a day leading up to the launch, actors dressed in gold costumes and face paint were planted around London with copies of the book in hand. Things kicked off behind closed doors with a photocall where Higson posed with the golden actors and members of Puffin's Young Bond publishing team.

Then, approximately 100 Young Bond fans, many dressed in gold clothes and cowboy hats, arrived to be greeted by the golden actors while Mariachi music played and hors d'oeuvres of tortilla chips and golden cupcakes where served. Charlie Higson made his entrance dressed in a gold jacket and tie, then read an excerpt from the book in which Young Bond attempts to negotiate the flooding streets of a Mexican village behind the wheel of a super-charged 1933 Duesenberg SJ, truly one of the novel's most exciting sequences. After a Q&A, during which Charlie teased the possibility of a Young Bond short story and also delivered a Book 5 bombshell (video below), he signed copies of Hurricane Gold in gold pen. 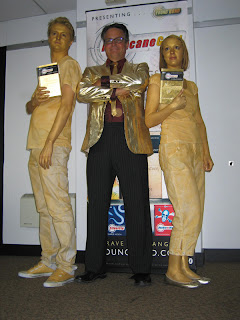 Hurricane Gold shot to #2 on the UK bestsellers chart, but was held at bay by Harry Potter and the Deathly Hallows which kept a strangle hold on the #1 spot. Still, Hurricane Gold sold an impressive 6056 copies in only a half week of sales and proved another monster hit for Puffin.

The backlist was also proving to be gold, with Puffin releasing the first four books as hardcover "Limited Collectors Editions" signed and numbered by Charlie Higson and housed in attractive slipcases. A signed Collectors Box Set of the first three paperbacks was released exclusively through Borders, and all the titles were released as audiobooks with Charlie Higson reading the abridged versions and actor Nathaniel Parker doing the unabridged versions. There was also talk of releasing the series in Adult Editions, a plan which, unfortunately, never came to fruition.

The success of the series was also having a liberating effect on Charlie Higson himself. "It’s interesting, as the books go on, I’m less worried about pleasing the kind of James Bond purists," Higson told me in an interview on CommanderBond.net shortly after the UK release of Hurricane Gold. "Over here in England, Young Bond is very much seen by the kids as character in his own right. They’re not constantly relating it back to James Bond and the adult Bond and all that. They enjoy the books for what they are, and the character in the books for who he is. And that sort of gives me a little bit more freedom."

But then Higson gave a taste of what was to come next. "That being said, book number five probably will be the most similar in themes and plot elements to a Fleming book. And it certainly moves much more into the world of the Secret Service."


Charlie Higson delivers his Book 5 bombshell
Posted by John Cox at 8:11 AM