As 007 fans eagerly await the title of the next James Bond film (will it be a Fleming or original?), I thought I'd throw up this terrific bookstore teaser from 1983 showing what was then the new James Bond book, ICEBREAKER. Certainly this is one of the great Bond titles for one of the very best Bond books. I'm also just partial to one-word Bond titles. 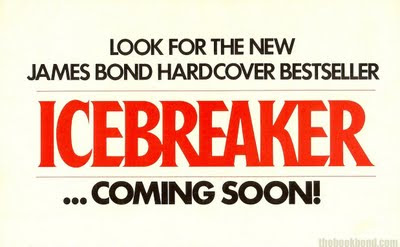 Ironically, ICEBREAKER was a title that author John Gardner had to fight for. In a 1985 interview with Bondage Magazine (Number 14) he spoke about what was then his fifth Bond novel (Nobody Lives Forever), saying:

"We haven't a title yet...I got an odd title that they said, 'Well, maybe...but maybe we can do better than that.' But they said that with Icebreaker. They went though a hundred and one different titles, and then went back to Icebreaker."

(BTW, Gardner's "odd title" choice for his fifth book was You Only Die Once.)
I expect Eon is currently going thorough their own one hundred and one title ideas. Let's hope when they settle it's a title that's as solid as ICEBREAKER.
Posted by John Cox at 7:47 AM