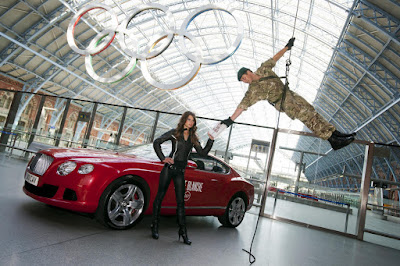 , arrived in style at St Pancras International in London today (Wednesday 25 May 2011). Copies of the book by the best–selling American thriller writer Jeffery Deaver, published in the UK tomorrow by Hodder & Stoughton, were delivered by the Royal Marines Commandos in a stunning display involving abseiling, a fast car and a beautiful Bond girl on a motorbike.

In a scene which could have been lifted from a James Bond novel, Jeffery Deaver pulled up at Europe’s longest bar – The Champagne Bar at St Pancras International – in a special Carte Blanche red Bentley Continental GT flanked by a Bond girl clad in black leathers.

It was by air, however, that the author received the first copy of his novel. In a dramatic twist to the launch, four members of the Royal Marines Display Team descended from the iconic roof of St Pancras International onto the concourse below, bearing copies of the novel. The books were handed over to Deaver in front of members of Ian Fleming’s family and invited guests, before being put under lock and key in an undisclosed location. The plot of the book remains, until midnight tonight, a closely guarded secret. 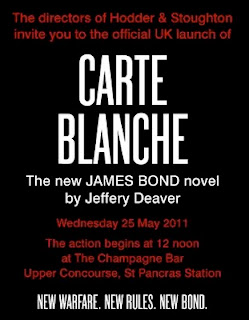 Despite the secrecy surrounding Carte Blanche, it can be revealed that each part of the launch had particular relevance to the new novel and to Ian Fleming, the creator of the original James Bond novels, who would have been 103 this Saturday, 28 May. St Pancras International, at the heart of London, is a fitting venue for a very British icon who became an international phenomenon whilst the Bentley Continental GT is the car of choice for Deaver’s Bond. The day’s Bond girl, who drove a BSA 1966 Spitfire motorbike to the launch, is inspired by one of Bond’s love interests in Carte Blanche, whose passion for speed and fast engines rivals Bond’s own.

As an integral component of the Naval Service the role of the Royal Marines Commandos is also pertinent. A Commander in the Royal Navy, Ian Fleming worked as Assistant to the Director of Naval Intelligence during the war years and was responsible for the creation of a specialist unit of commandos known as 30 Commando or the 30 Assault Unit: trained commandos specialising in targeting enemy headquarters to secure documentation with an intelligence value. In Carte Blanche, Jeffery Deaver’s 21st century Bond served in the Royal Naval Reserve, including a tour in Afghanistan, before joining the secret service.

Lucy Fleming, Ian Fleming’s niece, commented at today’s launch: “On Saturday my uncle, Ian Fleming, would be 103 years old. If he had been here today he would have loved the occasion. “With his brilliant plot and clever twists, his perfectly horrible villain and his detailed knowledge of the British intelligence Service, Jeffery Deaver brings Bond straight into the heart of modern espionage.”

Carte Blanche will be published in hardback by Hodder & Stoughton tomorrow, Thursday 26 May 2011, just ahead of Ian Fleming’s birthday on Saturday 28 May. Priced at £19.99, the book will be available nationwide. For more information, visit www.007carteblanche.co.uk. 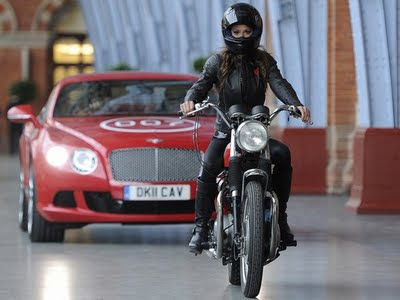