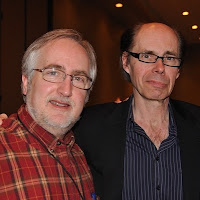 With the announcement of Jeffery Deaver as the new James Bond continuation author, past Bond authors have shown their support.
Tweeting from the road during his recent world book tour, Young Bond author Charlie Higson says, "Good luck with the gig. From one Bond scribe to another."
Simon Gardner, speaking on behalf of his late father, John Gardner (Bond author from 1981 to 1996) says, "JG was a big fan he would be sending his best wishes if he was still with us. Good luck with the gig from all @johngardnercom."
Finally, Raymond Benson, Bond scribe from 1997 to 2002 says, "Jeffery Deaver and I are good friends. We served on the Jury (with Val Kilmer!) of the 2005 Noir in Festival (film noir festival) in Courmayeur, Italy, and have participated in many writer conferences together. Great guy."
Posted by The Book Bond at 9:34 AM