Charlie Higson says Young Bond 2 would be a trilogy 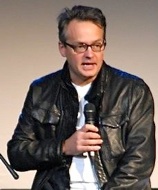 During his appearance at the Politics & Prose bookstore in Washington D.C., Charlie Higson revealed that should there be a Young Bond Series 2 it would be a “trilogy” of books.

Charlie also mentioned this “trilogy” idea during his appearance in St. Louis, where he also confirmed a new series would be set at Fettes, the school Bond attended after Eton.

It’s still uncertain whether Charlie will pen a new Young Bond series. Currently he is busy with his new horror series (also a trilogy) for Puffin Books and has only just completed the second book, The Dead.

Thanks to ‘Dlibrasnow’ for the tip.
Posted by John Cox at 4:48 PM