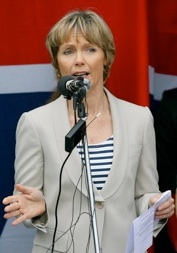 Sony Pictures recently flew a select group of online journalists and bloggers to England for what sounded like a spectacular four days of Bonding with the stars and filmmakers of Quantum of Solace.

Interestingly, a report at Ain’t It Cool News reveals that part of the junket included tea at Browns Hotel (a favorite haunt of Ian Feming’s) with Lucy Fleming herself (pictured left at the Devil May Care launch in May). Even more interesting is the talk, for a moment at least, turned away from Daniel Craig’s 007 and to Charlie Higson’s Young Bond.

Hey, when Lucy Fleming talks, we listen, so here’s the relevant paragraph from AICN.

“Daughter of actress Celia Johnson and writer Peter Fleming, Lucy Fleming was really enjoyable to talk to about her history with her uncle's work. Since 1997, she and her sister Kate have been in charge of Ian Fleming Publications, which continues to publish James Bond titles as well as a series for young adults called Young Bond, which are apparently quite popular in the UK and have seen five books published since 2005. She admitted that she's been approached about adapting Young Bond into movies, but the company hasn't decided whether this will happen.”


So there’s the latest on Young Bond films from the very top. Nothing yet.

For more about the junket, check out the report by our good buddy Jim Vejvoda (aka Stax) at IGN.com.
Posted by John Cox at 5:59 PM