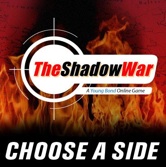 During his appearance at the Edinburgh Book Festival today, Young Bond author Charlie Higson launched The Shadow War, the groundbreaking new Young Bond alternate reality game that can be played at www.youngbond.com.

Today fans are asked to choose a side. You can play as either a British SIS agent or a Soviet OGPU spy in anticipation of your first full Mission which will launch on Wednesday, 27th August (we will announce each new Mission here on our news page).

The Shadow War will total seven exciting missions, culminating on 8th October with a live event, hosted on the game site and featuring Charlie Higson, in which players will be able to ask questions and influence the end of the game.

So head on over to www.youngbond.com, choose a side, and prepare for WAR.
Posted by John Cox at 9:01 AM