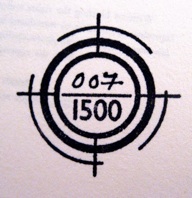 The elusive Hurricane Gold #007 has sold on eBay. The seller discovered the book in a small bookshop in Lytham St Ann's in Lancashire and put the book up for auction with an opening bid of .99p. The auction ended today with 27 bids and final sale price of £156.50 ($319.82).

Charlie Higson signed and numbered 1500 copies of his fourth Young Bond novel on August 10, 2007. These copies were made available only to independent bookstores.

Other Hurricane Gold signed editions have appeared on eBay, including #2 which sold for £70. But #007 (the only single digit copy to receive a double-oh prefix) is unquestionably the “golden ticket” of the batch. 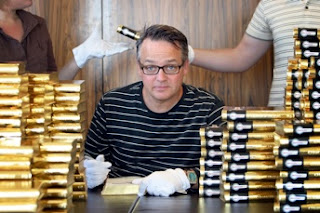 UPDATE: I didn’t want to say anything until I had the book in hand, but the winner of this auction was...me. 😀
Posted by John Cox at 9:28 AM