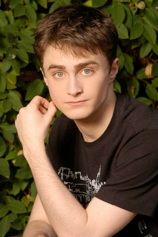 Movie news site JoBlo.com is resurrecting rumors that Daniel Radcliffe may play Young Bond in a new series of movies based on the bestselling Charlie Higson novels. The website cites a source they call “Average Kadavra”, who claims, “there's interest in the wand-waving thespian once again for the part...and the Radcliffe camp is in fact considering it.”

Bond fans shouldn’t get too excited (or upset) at the idea of Harry Potter morphing into Higson’s Bond. These Radcliffe rumors first got play back in 2005, but IFP and Charlie Higson have stated again and again that even though they’ve had offers, there are currently NO plans for a Young Bond series of films. As recently as last week Charlie reiterated this on the Jonathan Ross radio show and in an interview for CBBC Newsround. The plan is to establish Young Bond as a literary franchise before the idea of films are explored.

Besides, even if plans for a Young Bond series of films were underway, Radcliffe, who is now 18, is certainly too old for the part. The five Young Bond novels cover James’ life from age 13 to 14. In this regard, these Radcliffe rumors are as unlikely as the wave of Orlando Bloom as Young Bond rumors that hit the media with the release of SilverFin.

Still, it is nice publicity for the books, especially here in the states, but well-informed Young Bondites can feel comfortable in shrugging off all reports of Daniel Radcliffe as Young Bond.
Posted by John Cox at 4:39 PM