YOUNG BOND: HEADS YOU DIE released today in the UK

The 007th Young Bond novel, Heads You Die by Steve Cole, is released today in the UK. The book is being released simultaneously in paperback and as a limited edition hardcover, which is a first for a Bond novel. 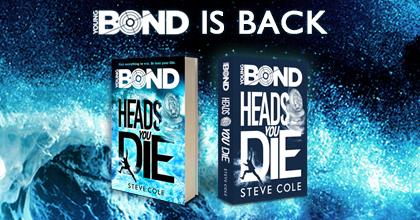 James's Cuban holiday has become a nightmare mission to save one of the last remaining links to his past. If he is ever to see his friend again, he must steal the darkest secret of a man with 1,000 ways to kill.

Pursued by corrupt cops and hired assassins, James's quest takes him from the sun-drenched streets of Havana to a mystery wreck deep in Caribbean water – and beyond to a deadly showdown. As a countdown to mass murder begins and killers close in, fates will be decided with the flip of a coin.


Unfortunately, I did not receive an advance copy of this book, so I won't be posting my regular Book Bond review anytime soon. But the description sounds fun -- Cuba is a first for the literary James Bond -- so I'm excited to discover this one along with everyone else.

While it has yet to be officially confirmed, it appears Heads You Die will be the first of TWO Steve Cole Young Bond novels to be released this year.

Purchase Heads You Die at Amazon.co.uk. U.S. readers can find the paperback edition via third party sellers on Amazon.com.
Posted by John Cox at 12:00 AM