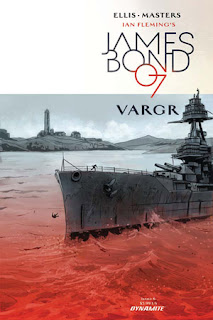 Dynamite's James Bond VARGR #6 is released today (delayed from its original April 6 release date). This is final installment in the first story arc by Warren Ellis and Jason Masters.

The secret of VARGR is revealed, and it means that Bond has to descend into a nightmare scenario - alone. Just his gun and his skills versus a murderous conspiracy to turn Britain into a testing zone for death drugs. Dynamite Entertainment proudly concludes the debut storyline to the first ongoing James Bond comic book in over 20 years!


You can purchase VARGR #6 at the Dynamite website. A hardcover collected edition of all six issues will be released on June 21 and can be pre-ordered now on Amazon.com (U.S.) and Amazon.co.uk (UK).

The next series arc will be called Eidolon and will launch June 15 in James Bond #7.
Posted by John Cox at 7:05 AM