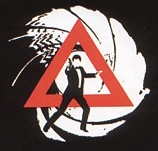 Independent Toronto publisher ChiZine Publications has announced that it will release an unauthorized anthology of James Bond short stories in November called, Licence Expired: The Unauthorized James Bond. The press release comes on the heels of an article on io9 which claims James Bond is now public domain in Canada.

"We want to feature original, transformative stories set in the world of Secret Agent 007," says co-editor David Nickle. "We're hoping our contributors will combine the guilty-pleasure excitement of the vintage Fleming experience with a modern critique of it."

"This is an opportunity to comment on the Bond universe from within it," adds Madeline Ashby. "We're specifically looking for writers and stories that would make Fleming roll in his grave."

So how real is this?

Well, if you check out this interview, you'll see that this is all a prelude to a Kickstarter campaign, so I'm skeptical. (I don't trust Kickstarter, having seen one too many scams.) I'm also skeptical of the claim of Bond being public domain in Canada. I think both Danjaq and IFP might have something to say about that.

When asked if they are worried about being sued, a representative of ChiZine states: "Of course I am. Isn’t everyone? But it’s worth the risk. After all. You only live twice."